Butter is now Out of Reach 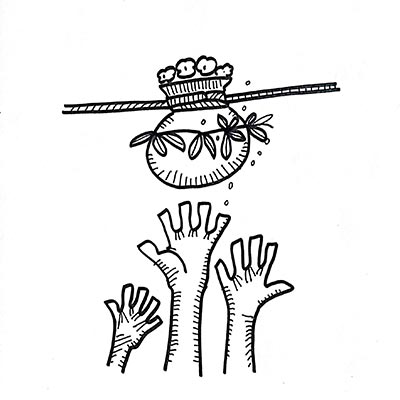 Thou shall not covet another’s property. Stealing is bad. And yet, Hindus worship a thief. The butter thief, makhan-chor. And heart thief, chit-chor. He and his friends break into the homes of milkmaids and steal butter hung high in pots above the reach of children by creating a human pyramid. The pot is broken and the butter distributed to children and monkeys. Why? Because butter, like love, must be shared, not locked away from people.

It is common in religions across the world to mimic events that happen in mythic time. The Nativity play is performed in Christian communities during Christmas time reliving the events around the birth of Jesus Christ. Goats are sacrificed by Muslims on Bakra-eid to remind themselves of the event when Abraham was stopped by God from sacrificing his son and accepted the offering a goat instead. Hindus re-enact the birth of Krishna at midnight, and his childhood determination to steal butter from milkmaids the following day.

As a child, I remember with excitement watching and participating in the Govinda festivals that is so popular in Mumbai. It would be a wet day. The pots would be put at the last minute. Boys from the neighbourhood would make pyramids. Girls would throw water. All in good fun. We would take bus rides to Lower Parel and Lal baug to see the legendary pots in industrial areas hanging from a great height. It was all done in the spirit of fun and affection, and a little bit of devotion thrown. We heard of girls also forming human pyramids — all novelty then but we cheered them too.

Then the dreaded politicians swooped in like the Death-Eaters in the Harry Potter books. The festival turned commercial and was commoditized and highly competitive — with boisterous teams galvanized to be better than others. They wear T-shirts to inform us to which ‘mandal’ they belonged to. Youth energy harnessed by political recruiters. It became about huge sums of money that would be put in pots. Not rich creamy butter but unaccounted-for black money. With Lakshmi, goddess of wealth, comes Alakshmi, the goddess of strife. The pots go higher and higher, the sums become larger and larger, and with that comes the accidents, the deaths, and the swooping in of law-makers and activists with unenforceable rules to control the excesses of the festival. We forgot that the sport was about team spirit and friendship and love and joy and sport and coordination and gymnastics and strength. It was not about politics or money. Suddenly it the festival was no longer about Govinda anymore; it was about the goons.

I miss the old Marathi stories of Krishna’s friends and sidekick: Pendya, who is a cripple and Vakadya, who stammered. I miss the Surdas bhajans of the exasperated milkmaids complaining to Yashoda, who at first is in denial and then punishes her darling son with tears in her eyes. I miss him, with butter-smeared face, insisting that he did not steal anything and the women are out to get him because they are jealous of his mother. I miss the games. I hate the competition.