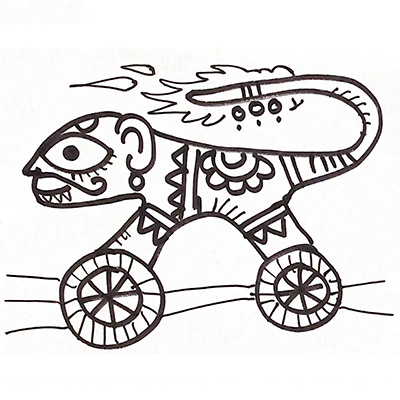 Ravana-podi means burning effigies of Ravana. In the Gangetic plains, this happens at the end of autumn Navaratri after the rains on Vijaya Dashami. In Odisha’s Dasapalla, Nayagarh district, the same happens at the end of the spring Navaratri before the rains on Ram Navami. However, in another part of Odisha, during the rains, people celebrate a different festival, not the killing of Ravana by Ram but the burning of Lanka by Hanuman. This is Lanka-podi and it is a children’s festival, sadly poorly publicised.

In Western Odisha, at the confluence of the River Tel and Mahanadi, there is a famous Tantrik Shakti site, where the goddess Lankeshwari is worshipped on an island. Children in the nearby village of Sonepur celebrate the burning of Lanka by Hanuman on the new moon in the lunar month of Bhadra (August/September).

The word Lanka simply means an island in many Indian dialects. This includes river islands. Sonepur means the city of gold, alluding to Ravana’s Lanka. The locals believed that this was the golden city of Ravana. On the rainy season’s new moon night (Bhadra Amavasya), children are given clay dolls of Hanuman. These are decorated with leaves and flowers. And on the festival night, these dolls are placed on carts, and taken around the neighbourhood, their tails wrapped with oily rags and set on fire. In nearby villages, young men fast all night, and go into a trance. They wear heavy ornamented Hanuman masks and walk on fire as part of a ritual to reenact the conquest of Lanka by Hanuman. Ravana masks here are worshipped with alcohol and fish, indicative of Tantrik roots.

In folk Hinduism, both Ravana and Hanuman are linked to the goddess and her Tantrik Siddha powers. Ravana uses this power for negative reasons for personal power and lust. Hanuman, however, through his celibacy and restraint over passions, transforms the tantric energy into good use, to serve humanity. These beliefs play a central role in Western Odisha, once seen as a centre of Tantrik practices. Could this be the original Lanka?

Baudhayana Dharma-shastra dated to 2,300 years ago clearly states that the region of the Kalingas should be avoided. The oldest Ramayana manuscripts describe a geography north of the Godavari. Lanka there is described as a place where the Sal tree grows. The Sal tree is found only in Chhattisgarh and Odisha, not further south. Lanka’s samudra is described as infested with makara, or crocodiles, which are found in the Mahanadi. Also interesting is that in Odisha, there is a river called Vaitarni, which, in mythology, separates the land of the living from the land of the dead, which is located in the South. With Aryavarta being restricted to the Gangetic plains, the “southern” regions were clearly regions now associated with Chhattisgarh, Jharkhand and Orissa. This was the land linked with death, hence Tantra, feared by Vedic Brahmins.

Aryavarta gradually expanded itself right up to the sea coasts by the time of Manusmriti 1800 years ago. By the time Chola kings controlled the Eastern coast of India, in the 10th Century, Ramayana was a popular epic in the South. However, Odisha clearly retains a primal tribal memory of a time when Ram’s southern journey extended from Gangetic plains to the Mahanadi basin, abode of the Tantrik Lankeshwari.