Buddhist scheme of things: King not just a king but a guardian of morality 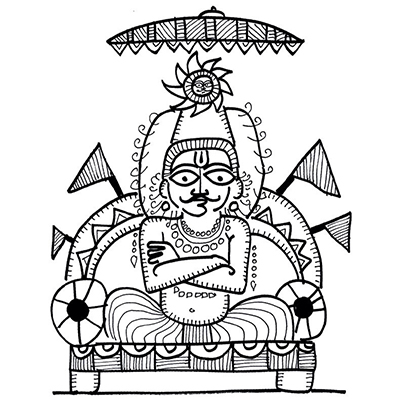 In times when people are talking of a crisis of leadership, it makes sense to understand what kingship meant to Buddhists. In Buddhism, the king played a key role in preventing anarchy, establishing order and spreading the Buddhist way. The great king in Buddhist literature was known as Chakravarti. The Chakra represents the empire: the circumference of the wheel represents the boundaries and the spokes represent the highways that connect the capital city to the frontiers. The Chakravarti possessed seven great treasures: the great wheel of kingship (a symbolic representation of power), a horse, an elephant, the queen, a commander or minister, a treasury and landholding householders who he protected.

Some of the earliest ideas of what a king should be come to us from the Jataka tales: tales that speak of Buddha’s previous lives, long before the one in which he attained nirvana. In many of these lives he was a king, explaining what the Buddhist idea of kingship was.

We learn the qualities of a great king through these tales. In the Dummedha Jataka, we learn a king should be stern, like the king of Banaras who threatens his subjects with beheading and impaling, if they do not follow the righteous path. In fear, everybody lives righteously, performing their roles in society and being generous with wise men and strangers.

Thus, the king uses the threat of violence to create a good society.

In the story of Brahmadatta Jataka, we learn of a compassionate king who saves three eggs in a nest, after he accidently shoots the bird. He takes care of the eggs as a parent. Three birds emerge from the eggs: an owl, a mayna (starling) and a parrot.

They end up giving the king wise advice which helps him be a great king. Thus, being compassionate is important.

In the story of Makhadeva, we learn about a king who knows that everything passes away. When he finds a single grey hair on his head, he realizes it is time to retire and he bequeaths his kingdom to his children.

We also learn of the generous king, Shibhi.

We also learn of a quality which a king should not have: greed. We hear of the great king, Mandhatta. He ruled a great kingdom for eighty-four thousand years. He was so great a king that neighbouring kings renounced their thrones and asked him to rule in their stead. However, he felt dissatisfied, feeling he should rule a larger empire. So, he rose to a heaven above earth and ruled there for another long period. In time, he wanted to rule the heaven of the thirty-three Gods.

When he goes there, Indra gives him half the heaven and rules the other half himself. As time passes, Mandhatta again experiences discontent. He now desires to rule the whole of heaven. He plans to overthrow Indra and become king. Each time his greatness enabled people to voluntarily give up their kingdom and make him king of a greater land.

However, this time, rather than wait and let it come to him voluntarily, he tries to grab power. Consequently, he not only loses his divine glory but his place in heaven and slips down to earth and dies. This is a cautionary tale against over-ambition: a lesson that we can learn even in modern times.

In the Buddhist scheme of things, it is the duty of the king not only to spread dhamma amongst his people, but also to protect the dharma teachings when the world gets corrupt and people become incapable of following Buddha’s teachings. That is why Buddhist kings like Ashoka, 2,300 years ago, and Kanishka, 1,900 years ago, played a key role in gathering Buddhist knowledge and codifying them. Buddhist lore constantly spoke of how Buddhism will end because of attacks by invaders and because of infighting amongst various Buddhist teachers. But as long as there was a good king, the teachings of the Buddha would survive.

The king, or leader, in the Buddhist scheme of things was thus not just a politician but a guardian of morality and ethics. He had to be not just brave but also compassionate and understanding of his people. He had to understand the fragility of his reign and the dangers of over ambition.

And most importantly, he had to secure what he knew would eventually fade away, so that what died in the present would revive in the future. The Buddhist king was thus not just seen in materialistic terms but also in the deepest spiritual terms.