Bromance is a strong part of Indian tradition, and different from same-sex attraction 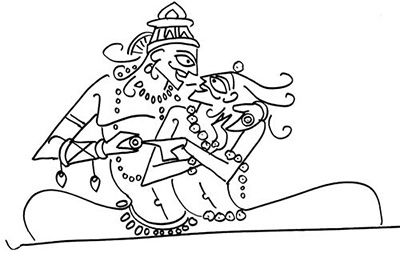 Recently, I walked into the Mumbai airport lounge and saw, on one of the wide sofas, a man and a woman taking a nap, spooned into each other. They were clearly exhausted travellers waiting for a flight. But the cuddling between the couple was a bit intimate for the public space. Everyone who walked past was giving them a second glance. A bit later, I noticed two members of the housekeeping staff, both men, holding hands, while taking a break. No one walking past was giving them a second glance. Of the two public displays of affection, one between members of the opposite gender that was clearly romantic is known in Indian aesthetics as shringara bhaav and the other between members of the same gender which is friendly and familial is known in Indian aesthetics as sakha bhaav.

Thus differently people see the world differently and value public displays of affection differently based on different measuring scales. It is only now that Hollywood is realising the power of bromance (deep almost-romantic relationships between men), something that has long inspired Bollywood films. Indian films do not mind showing men hugging and dancing with each other, but kisses between men and women were blocked by flowers! Western films showed men and women kissing but rarely did you see men dancing with each other.

It really stems from the differing attitudes towards space. Westerners are very particular about private space. This may have something to do with the fact that in India’s poor and overcrowded settlements there is no notion of privacy; men and women are used to sharing stuff with family members, even friends. By contrast, affluent West has for generations afforded to give every child a separate bedroom, a world of their own. Many Indians are startled when they are rebuked by Westerners for being too curious about their personal lives, or too familiar with their children. While being affectionate with a stranger’s child is greeted with a smile from the parents in India, in the West it results in a frown, and a stranger showing affection to a child stands accused of being a paedophile, an idea that would not cross most Indians mind. In fact, many paedophiles take advantage of this leniency offered by Indian society, just as many gay men benefit from the Indian comfort with men holding hands.

Same-sex love is a strong part of Indian tradition and needs to be distinguished from same-sex attraction. The former is affectionate, bordering on the romantic, but is not sexual. Krishna and Arjuna, for example, referred to each other as sakha, or beloved friends. Heroines of Indian lore are surrounded by sakhis, beloved friends, who often marry into the same families as them so that they do not have to part company after marriage. One can speculate that society separated procreative sexual love from the romantic love. The former was for husbands and wives, for the sake of children. The latter was between sakhas and between sakhis. Since men and women in India lived in separate worlds due to gender segregation, with women in the inner part of the home (ghar) and men in the outer part of the house (ghera), and contact between members of the opposite sex was primarily sexual, for sake of children, people often found emotionally nourishment from members of the same sex. This led to public displays of same sex affection, and nobody had a problem with it. Problems emerged if the romantic gestures transformed into a sexual gesture.

In Western societies, which tend to be isolationist, private space is fiercely guarded, and children are encouraged to sleep in separate beds and separate rooms from their parents and siblings, romance allows for an outpouring of physical intimacy, not just in the privacy of the house, but also in public. You feel safe and happy and want to be with your lover in the open and demand that your private space be still respected. Naturally heterosexual Westerners find it odd when their displays of affection that went unnoticed in Europe and America attracts gloating crowds on the streets of India but no one bothers about two men holding hands, that could unleash homophobic violence back home.