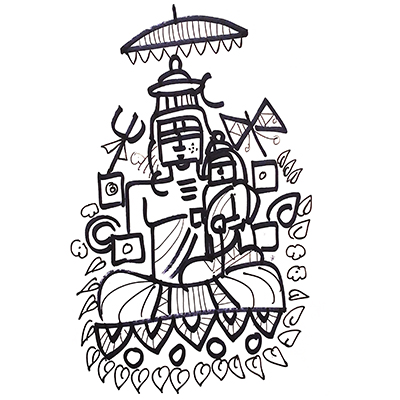 Hindu mythology is not static. It has changed over history. In the Rig Veda (1,500 BCE), we are introduced to Indra. He is a powerful celestial being who rides chariots and who defeats enemies like Vritra, Pani and Vala to secure stolen cows and release water. We don’t hear stories of devas and asuras fighting. The idea of devas and asuras fighting comes in later Brahmana literature (1,000 BCE). In Brahmana literature, we also have the story of Manu saving a small fish from a big fish, and of Prajapati taking the form of a giant turtle and a giant boar, to help the earth float on flood waters.

In the Mahabharata, for the first time, the concepts of Swarga and Naraka are elaborated, and we are told there is something higher than the realm of the devas. In other words, beyond the world of abundance and the world of scarcity is a greater heaven based on contentment. These are the abodes of Shiva and Vishnu, elaborated in later Puranas. When the Mahabharata was finally written 2,000 years ago, Indra had lost his exalted position. He was seen as an insecure god who needed help from Shiva and Vishnu to save him. He was also shown bowing to the Buddha and the Tirthankaras. In the Ramayana too, Indra adores Ram, and needs his help to defeat Ravana.

When the Puranas emerged around 500 CE, i.e. 1,500 years ago, we hear of asuras performing tapasyas to attain immortality. It is here we realise the birth of Tantric ideas. Humans think they can become more powerful than the gods by practising special austerities. We learn of Rishis who can curse even gods. We learn of asuras seeking immortality and being constantly told that death cannot be escaped. All things must die. It is in the Puranas that we are introduced to the idea of avatar, the idea of an immortal god taking mortal form on earth. Ram and Krishna are part of the list, but other characters are added such as Parashuram of Ramayana and Mahabharata, and the Vedic fish, turtle, boar and dwarf.

The Puranas also speak of the importance of marriage. This comes as a direct contrast to the Buddhist and Jain ideas. In Buddhism and Jainism, the holiest of men attain the highest spiritual levels by abandoning wife, children and property. In Puranas, the Hindu trinity was visualised as three couples. From 700 CE, we find stories as well as images of Durga, and Kali everywhere. Tantra literature speaks of Shiva and Shakti having a conversation on the nature of reality.

With the rise of Bhakti movement from the 15th Century onwards, we find more stories of devotees of gods, how they have the grace of God in their life. These are the Bhaktamala stories. This idea emerged in Tamil Nadu in 8th Century and spread north. Devotion, we are told, is the way to break the cycle of rebirths. Temple stories become increasingly popular.

Thus, Hindu mythology has transformed from the Vedas, through the Brahmanas, and the epics, to the Puranas, and Bhakti literature. New stories are added over old ones. And we realise that mythology is not static. It changes over time.