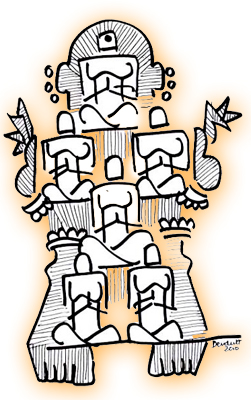 Have you ever realized that the person who serves you from behind the counter at a Mall or a Mutliplex usually cannot afford the things he sells? Not the tickets of the theatre or the popcorn or the clothes in the boutique. India’s great divide is so common place that we have coped with it by rendering it invisible until it explodes on our television in the form of Maoist attacks and railway motormen strikes.

In Western mythologies, whether it is Greek or Biblical, all humans are considered equal. Inequality, say the Greeks, is a result of divine mischief to distract humans so that we do not threaten the Olympian gods. In the Bible, inequality becomes the work of the Devil. Capitalist and Communist thinking is greatly influenced by these Western mythological themes. Capitalism tries to make everyone rich by generating more wealth while Communism tries to make everyone rich by distributing whatever wealth is available.

In India, the Rig Veda states that in the beginning the primal being divided itself to create social strata — from the head came the intellectuals, from the arms the politicians, from the trunk the entrepreneurs and from the legs the laborers. This hymn known as the Purusha Sukta acknowledges social hierarchy. The British rulers of India pointed to this hymn as the root of the Indian caste system. Indian social reformers, embarrassed by the revelation, agreed and worked hard to break free from its legacy. In apology, some pointed out that the hymn was a ‘later interpolation’ and that originally, the Rig Veda also believed everyone in society was equal. Others defended the hymn saying that the varna system of the Veda was based on aptitude, hence was fluid, and was different from the later caste or jati system that was based on birth, hence rigid.

In all these debates surrounding caste and class in India, the wisdom called Vedanta, squeezed out of Vedic hymns, is forgotten. Vedanta states that every human being has two parts — the soul or Atma and the flesh or Deha. The soul is indifferent to social hierarchy — it has no varna or jati or gender. It is equal. In fact, it is essentially divine. The body by contrast is sensitive to social hierarchy — it is subjected to all kinds of social forces such as caste and class and economic divides. These social forces are the creations of man. Hence it can be perpetrated or destroyed, depending on the level of human wisdom. Since all humans will never have the same level of wisdom, there will never be social equality at any time.

The assumption, based on modern political theories, that we can bridge the great Mall & Multiplex divide by helping the poor become rich and the rich richer, seems rather fantastic. A place where all people have access to all resources equally is called Utopia. Utopia exists only in the human imagination. In reality, there is no such world. There will always be people who have more wealth than others.

Vedic thought considers the divide of society as eternal. In other words, material equality can never be achieved. Yet, it is possible to create harmony provided one acknowledges the needs of the soul. The soul yearns for fulfillment. This happens by experiencing wealth and then outgrowing it. So perhaps the need of the hour is to help the poor get out of poverty while helping the rich outgrow their attachment for wealth. One without the other will only lead to frustration and conflict.