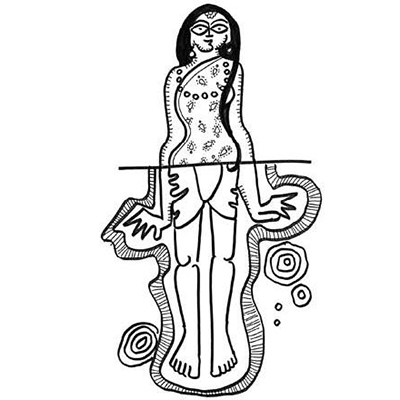 In the Puranas, we have heard the story of the Narasimha avatar. Hiranyakashipu had obtained a boon from Brahma that he should not be killed by either man or animal, at day or at night, above or below, inside or outside, by neither weapon nor tool. This boon rendered Hiranyakashipu invincible and immortal. He assumed he was God until his son Prahalad said that a greater power exists in the world, everywhere, even within the pillars of his palace.

Hiranyakashipu smote one such pillar and, from within the pillar, emerged a strange creature that was neither human nor animal. The creature caught hold of Hiranyakashipu and dragged him to the threshold, which was neither inside nor outside a dwelling, and at dusk, which is neither day nor night, picked him up and placed him on his thigh, which is neither above nor below, but, somewhere in the middle, and then tore his guts apart using his claws, which are neither weapons nor tools. Thus, the impossibility of a creature and a moment like this is achieved.

Hiranyakashipu had assumed that the world is made up of binaries, this and that, day and night, white and black, zero and one, but, Narasimha or Vishnu or Narayana had revealed to him that the world is not made up of binaries, that there is a whole world between and beyond the binaries. The story reveals the ancient understanding that the world cannot be reduced to binaries although, modern rational thinking tends to move that way because it is convenient. We forget that binaries are used to make our lives convenient but, they do not reflect the truth of nature.

Binaries are a cultural concept for simplicity. But, in nature there is no such thing as binaries, things wax and wane, telescope into each other, there are species which mingle and merge and there is no absolute. Things are constantly changing and are in a state of flux. Hence, the rishis, the ancient wise men of India, never accepted binaries, to the extent that in Sanskrit and Prakrit, the ancient languages of India and Tamil, we find over 50 words which we refer to today as ‘queer’.

The modern word ‘queer’ refers to rising between and beyond binary genders, male and female, masculine and feminine but, appreciates the fact that human beings exist in a fluid spectrum between and beyond these two concepts of gender. And, therefore, in Hindu, Buddhist and Jain literature there are vast descriptions of different kinds of queer, from cross dressers to transgenders, to intersects, to lesbians, to gays. The existence of multiple words, over 50, reveals the close understanding of this, that it is possible for a male to have desire for a female, female to have a desire for a male, for men who behave like men to desire women, men who behave like women to desire women – so all kinds of permutations and combinations.

A similar idea is found far away amongst the native Americans. The native tribes of America have the concept of two spirits. Two spirit individuals were, what we call today, queer, and there were a whole variety of two spirit individuals. These were men and women who do not conform to the cultural notions of male and female, who either want to behave as members of the opposite gender or have desires for members of the same gender and are generally fluid. This reveals that the ancient Hindus and the ancient indigenous tribes had a closer association with nature. An association that was ripped apart as we created civilisation that denied the power of nature where no binaries exist.

This article is also listed under Indian Mythology, Puranas, Queer