Breaking Out Of the Indra-Jaal 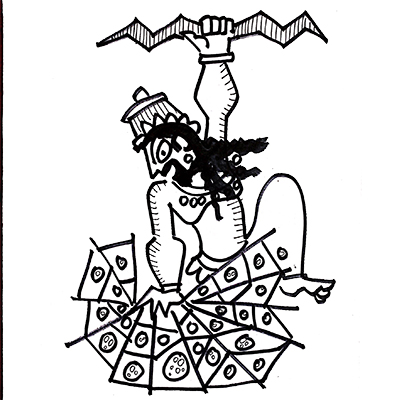 The concept of Indra’s net, or Indrajaal, comes to us from the Atharva Veda. It speaks of Indra capturing his enemies with a net, pinning them to the ground, and smiting them victoriously. Seen metaphorically, Indra-jaal is the web of delusions (maya) that establishes the world. This philosophical idea is elaborated by Buddhists, but in the hands of magicians, is sorcery unleashed on the unsuspecting audience and ends up entrapping the magician himself – much like social media.

In Buddhist scriptures, Indra’s net is described as hanging from Mount Meru. It extends in innite directions. Each eye of the net contains a ruby. Each of these rubies reects other innite rubies. Thus, the recursive nature is used as a metaphor to explain the world. The one contains all, every little object in the universe is a function of everything else. This visualisation is used to explain the Buddhist idea of dependent origination – nothing has independent existence; everything is a function of something else. Nothing really concrete exists. This is nothingness (shunya) manifest as everythingness or innity (ananta) and constitutes the world we experience (samsara). This visualisation of Buddhism denies the existence of atma.

The same idea is taken up by Shankaracharya where he says the apparent diversity of the world is a delusion of the senses and the ego. Our senses – indriya -spread out nets, reecting our own desires and our own mind and ego entraps us in it, like a spider spreads out its web to trap ies. If we outgrow this sensory attachment, we will realise the common underlying unifying truth, which is aatma, beyond the myriad manifestations of Indrajaal. Thus, Shankara proposes the monastic ideal of withdrawing from the world to realise the truth, beyond the diversity.

This idea of Indra’s net has fascinated many Hindutva forces especially those in America who have constructed the oxymoron of ‘intellectual Kshatriyas,’ warriors who think. Traditionally, in the Vedic imagination, the thinking part was done by the Brahmins who chose non-violence. The violent Kshatriyas were seen as puppets who would do what the non-violent Brahmins would tell them. In contemporary times, upper caste knowledge workers, from the IT sector, who migrated to the West, who yearn for ‘traditional’ Indian culture, while enjoying American wealth and freedom, feel they need to ght for India, overrun by socialist forces. Their weapon is the internet. They wish to challenge the colonial and Marxist interpretation of Indian history and culture, based on evidence, that is widespread with the Hindutva interpretation of history, based on folk memory. In the quest to reairm Indian thought on the internet, they have created Indra-jaal, a network of fake news, that eclipses real news.

Today, social media is the Indra-jaal spread by Hindutva to terrify the intellectuals into submitting to the notion of Hindu rashtra. It seems to be a fairly successful strategy, as of now, questioning even the actions of police, and the judgement of courts, making the common man even doubt his own sanity. All this while the Indian Constitution is being slowly eroded, and experts in various elds are being declared invalid and irrelevant.

But history informs us that Indra’s net as a metaphor failed in Indian society. Eventually, the Vedic Indra, the original wielder of Indra-jaal, lost his exalted position. From the mighty warrior-king of the Vedas, he became subservient to the Jain Tirthankaras and the Buddha, seeking their wisdom. In Puranas, he is shown as constantly seeking the help of Vishnu and Shiva. Indra is shown as eternally insecure, as he realises that he is replaceable and no Indra is permanent. The position of Indra may be permanent but he will be eventually overthrown by someone worthier. Thus, the main god of the Vedas has no temple or festival in his honour, any more. Despite skilful use of the network of delusion, he ends up trapped in his own net. That is the greatest lesson of Indra-jaal.