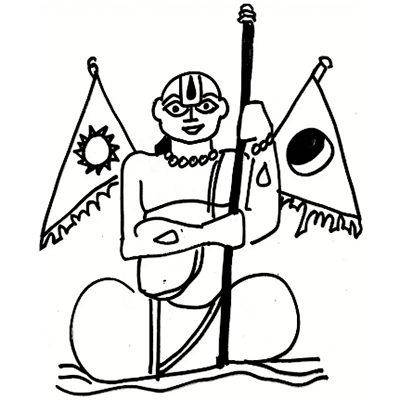 Brahmins as Kingmakers: A glimpse into the political scenario in ancient India.

If you read Indian history, you would often come across stories in which a king, wanting to coronate himself, or an ambitious warlord, wanting to transform himself into a king, would invite Brahmins from a particular region to consecrate him. The reason (more often than not) was that the local Brahmins would not support him. Unless he got Brahmin support, he could not legitimise himself as a king. This role of Brahmin peaked from the 3rd Century onwards, marking the rise of the Gupta kings and Puranic literature.

The Brahmins would make a king in two ways, one by establishing his genealogy and connecting him to the kings of yore from the solar or lunar dynasties. But more importantly, a brahmin established a system of governance based on the Dharmashastra and Arthashastra. This is what the Brahmins brought to the table. This which made them very popular and powerful in India.

The Brahmin model of kingship was different from the Buddhist or Jain model of kingship. In the Buddhist or Jain model, kings legitimised themselves as guardians of the faith, by supporting the Buddhist Sangha, for example, and by doing that ensuring the support of the people. The Brahmin model was rather different. It focussed directly on the king rather than the people. They legitimised the king’s claim through the gods, and then implemented the business of creating a kingdom by establishing successful villages whose wealth made the king rich.

For their service, the Brahmin was allotted land. This was called Brahmadeya or Agrahara lands. On the land given, he established the temple. The local deity would be transformed and connected to the Puranic deities. The temple kovil would also serve as the palace of the king and was a representation of the king. Kings would die but the temple would survive. The king therefore would also be the regent of the god. It is through this temple that the kingdom was established. It was not quite theocracy, but god became king and king became god, in order to get the local communities to come together.

The Brahmin would then establish social order, through the king and his family. The landowners were the kshatriyas. Whoever controlled the land became the most powerful connection to the royal family, usually, an extension of the royal family. The merchants who focussed on market economy and not land economy were the Vaishyas. The rest were labourers and service providers, the Shudras. Various tribal groups joined this framework of ‘varna-jati-dharma’ by providing a specialised service, say basket making, or honey providing. Thus various communities were aggregated into the system. Aggregation was not assimilation: they contributed to the system but followed their own religious rituals, so long as the core of king and Brahmin was respected and maintained, which accounts for the diversity and tolerance, despite hierarchy, of Indian society.

The Brahmins also were divided. On one level, there were the Brahmins more closely associated with the temple; and then there were those interested in bureaucracy and courtier-ship. Over time, the latter became what was known as the Kayastha community. This role of Brahmin peaked from the 3rd Century onwards, marking the rise of the Gupta kings and Puranic literature.

When the Muslims came into India, the Kayasthas continued to service these kings, earning the wrath of the purest Brahmins, who preferred withdrawal to the temples and their scholarly studies rather than serve the Muslim rulers. While Muslim rulers brought the Persian codes of governance to India, they also assimilated the Brahmin models to expand their reach. This system was totally shattered with the Europeans, who reduced Brahmins to clerks, and refused to grant them the status of equals given by kings, and even sultans, of yore.