Both sides of the Fence 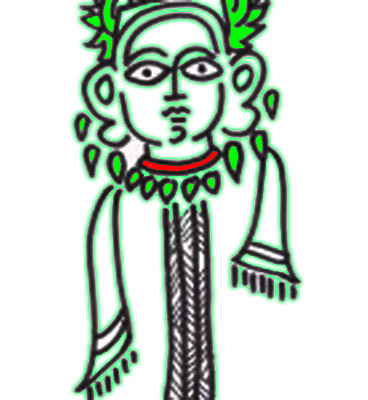 Once upon a time there was a young warrior who wanted to participate in the battle of Kuru-kshetra between the Pandavas and Kauravas. He came to the battlefield armed with three arrows. On the way the youth met Krishna and Krishna asked him why he was carrying only three arrows. “With one,” he said, “ I can destroy the Pandavas, with another the Kauravas, with the third, I can kill Krishna.” Krishna asked the youth to prove it.

The youth pointed to a tree and said, “With one arrow I can pierce each and every leaf from the tree.” Krishna asked the youth to demonstrate his skill, secretly plucking five leaves from the tree and placing it under his foot. The warrior shot an arrow and such was the skill that the arrow pierced each and every leaf on that tree and then pierced Krishna foot five times, once for each leaf. Krishna realized this warrior indeed was a great warrior and he could do what he claimed he could do.

Krishna asked the youth, “On which side do you wish to fight.” The youth replied, “I always fight on the side of the losers.”

The reply bothered Krishna: if the youth fought on the side of the losers and turned them into a winners then he would immediately change sides and participate on the losing side, and help them become the winning side. Thus he would move from side to side and keep turning the losing side to winning and winning side into the losing side, creating a vicious closed-loop, and a never-ending meaningless directionless battle.

Krishna could not allow this. He decided to destroy the warrior before he could participate in the battle. He asked the warrior, “Will you save me from the man who plans to destroy the dharma I hope to establish on earth?””Sure,” said the youth, “Point out that man and I will cut his head off.” Krishna then showed the man a mirror. “This is he,” said Krishna. Looking at his reflection, the youth realized that Krishna wanted him dead because he felt he threatened the outcome of the battle at Kuru-kshetra.

“Here, take my head,” said the youth, severing his neck. Pleased with the offering, Krishna gave the youth a boon. “Allow me to see the battle even though I am dead,”said the youth. So Krishna placed the head of the youth on a tree atop a hill and blessed the head with life so that the youth could see all the events that took place on the battlefield of Kuru-kshetra.

This story draws our attention to the idea of taking a stand. Krishna destroyed the warrior because he did not take a stand. He was neither fighting for the Pandavas or Kauravas, for the right side or the wrong side. He simply wanted to use his power to fight for the losers with the intention of making them winners, not realizing that this behavior would lead to no conclusion. The youth was focused more on his skills and less on the outcome he desired to achieve using his skills.

Mr. Ravikishore Singh encountered a warrior such as this in his Board meeting. He noticed that his most promising director spoke a lot, but never really took a stand. He would keep arguing both sides with such brilliance that it was difficult to take a call. When deliberating whether to partner with a multinational company to import a new chemical to India, the director argued eloquently on the benefits of doing so. As soon as most of the remaining Board members agreed with him, he started arguing on the dangers of doing so. This gentleman was so brilliant that he could see the positive and the negative side of both the situations. And because he could see both positive and negative situations he could never take a call, nor help others take a call.

Mr. Ravikishore Singh realized the director was not really adding value — yes, he threw light on many things, but ultimately proceedings were suspended as everyone was confused. Everyone was so locked in thought that there was no action. There was, what is popularly called, paralysis by analysis. Like Krishna, Mr. Ravikishore Singh decided to stop the young director from participating in more meetings. Without him, the Board could move forward, in some direction, hopefully the profitable one.

In meetings there are a lot of warriors who can play the Devil’s advocate and give the opposite point of view with great clarity , but by doing so , they can sometimes block the leader from taking a decision, and moving in a particular direction. Devil’s advocates are good so long as they enable the decision-making process. A good leader must be constantly aware of this. Rather than a contrarian who opposes the leader for the sake of opposition, one needs someone with a point of view, which when argued and articulated well helps the leader take a call, one way or another.