Both Rahul Gandhi & Narendra Modi subscribe to a western, Christian reading of Mahabharata 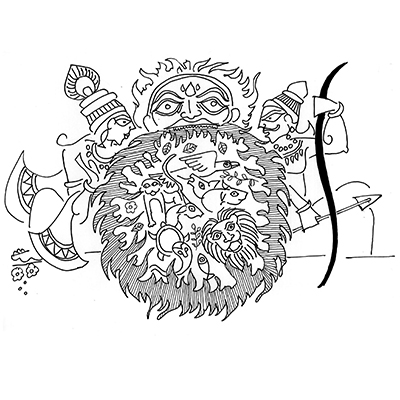 One can imagine, before the 2014 elections, Modi saying something similar – he, the meritorious outsider, fighting against the entitled prince. Every one imagines themselves to be Arjuna when reading the Gita! Everyone insists they are fighting for dharma, which continues to be mistranslated as righteousness.

The binary divide, be it Pandava/Kaurava or truth/power, is essentially western, similar to popular binaries like God/Devil, privileged/unprivileged, have/have-not, right/wrong, good/evil, heaven/hell. It assumes a grand finale. A happily ever after. Or should I say, ‘acche din’? This is the linear paradigm, which Hinduism, Buddhism and Jainism do not subscribe to.

In the Indic paradigm, there are no full stops, only commas. There is no armaggedon. There is no ‘judgement day’. There are only never-ending battles between devas and asuras, with alternating victories and defeats. The devas are the entitled residents of celestial regions and the asuras are the residents of the subterranean regions who feel tricked, denied and cheated of paradise.

The Mughal painters, and later the European orientalists, saw the devas as ‘gods’ and asuras as ‘demons’, and Amar Chitra Katha carried this misreading forward. But in the Puranas, they are two sets of children with a common father, Rishi Kashyapa, but different mothers, Aditi and Diti. The devas are privileged as they received the offerings of the yagna; the asuras are unprivileged as they do not get the same offerings and so fight the devas for it, or seek to disrupt the yagna itself.

From this mythic understanding comes the Hindu maxim ‘vasudhaiva kutumbakam’, which means ‘the world is my family’. Contrary to popular assumptions, this is no happy family. Here brothers, like the devas and asuras of the Puranas, fight over paradise and yagna. Here brothers, Kauravas and Pandavas of the Mahabharata, fight over property, just like Vali and Sugriva of the Ramayana. This is the primal conflict. Democratic elections every five years remain a fight for vote share. Brothers are still fighting like dogs over meat, neither willing to share or collaborate. Each one wanting the lion’s share.

The heroes of Hindu narratives are not true/good. They are simply humans who are able to overcome their imagined fear, albeit for a moment, and are able to be generous and share the world with their brothers. The villains are those who are unable to do so. The villain is not evil (a word with no translation in any Sanskrit- or Tamil-based language). The villain is just frightened; in fear, he clings to wealth and power and throne, like a dog clinging to its bone, a child clinging to its toy comforter. That is why Ram is not angry when he is shooting arrows at Ravana; nor is Krishna angry with Duryodhana or Bhisma or Drona, who are consumed by their insecurities. He is like the divine parent dealing with a terrified hence unreasonable child. Understanding this bhaav is key to understanding Hindu scriptures.

This bhaav is missing from Rahul’s speech. Understandable, the RSS and the BJP will say this is becasue he is the son of an Italian Christian mother. But the RSS and the BJP, Modi included, do not show this bhaav in their speeches. The fiery rhetoric of an evangelist ready to cast out the Devil is more their style. Actually, it is everyone’s style in a modern democracy. It is what wins souls, and votes.

You don’t see Rahul breaking down, like Arjuna at Kurukshetra, at the sight that he is attacking his own brothers and cousins and family members. You certainly don’t see Modi weeping at the thought of having to insult Manmohan Singh, or unleashing troll armies against those who say anything against him. Both of them subscribe to the modern reading of the Mahabharata. The binary of Pandava/truth and Kaurava/power is more Christian and western, than Hindu or Indian. This epistemological framework is at the heart of Hinduism, and Indianness, not the cosmetic saffron.

Here, we need a king who is like Vishnu, who gets the quarrelling devas and asuras to give up the tug-of-war and churn the ocean of milk and bring Lakshmi to everyone’s life. A Vishnu who eventually lets Kauravas get a seat in paradise, alongside the Pandavas, helping them appreciate the true meaning of family.