Bindi: A Homage to the Devadasi 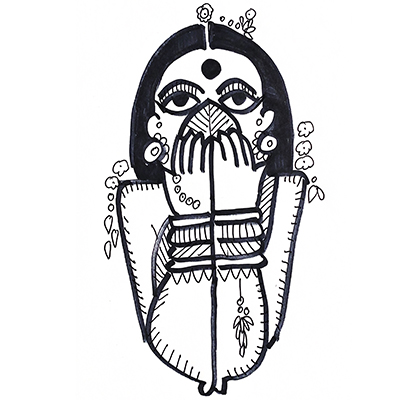 Devadasis, a crude catch-all word used to describe independent female dancers, musicians, and entertainers of India, have been wiped out of Indian history. She probably invented the bindi, and other female adornments, worn by women in India today. But like her contribution to music and dance, no one wants to consider this possibility.

The red dot (bindi) of vermillion (sindoor) placed on the forehead, a little above the bridge of the nose, is globally identified as a mark of Hindu femininity, just as the hijab is identified as the mark of Islamic femininity. But while Muslims quote the Quran or Hadith to legitimise their customs, the Hindus have no such textual reference, and we resort to the imagination of religious power brokers, usually men, and the women who adore such men.

American Hindus forced to explain their practice to fellow Americans try to make it esoteric and mystical: it’s the third eye chakra indicating Tantrik roots. But Tantra became mainstream only 1,000 years ago. This is when temple culture also peaked across India. This is when we find images of gods with marks on the forehead—Shiva with his third eye and horizontal ash mark, Vishnu with his vertical sandal mark and red tilak. The bindi seemed reserved for women, explained as the bindu or dot of potentiality of the goddess of power (shakti). This is ironic since the only women who had agency in ancient India were the courtesans, not the housewife, spinster, widow, or nun.

Early Buddhist art shows women with an ornamental tikka, a crest jewel hanging on the forehead, but not a dot on the forehead. There is textual reference to bright and fragrant kasturi marks painted on the face and limbs to make the body beautiful and attractive, but there is nothing spiritual or religious about it. Archaeology in Harappan sites indicate use of sindoor in that 5,000-year civilisation. Women of Harappa loved bangles, far more than women in other cultures. Was the use of sindoor and bangles linked to fertility as it is today? We can only speculate.

Earlier courtesans were free public women or naga-vadhu. Later, when marriage became important, she declared herself devadasi, married to the “God” of the village and so free to find her “husband” in all the men of the village. She wore the bindi always and was called nitya-sumangali. Husbands died, but she never became a widow as the village god was immortal. By considering bindi a symbol of Indian feminism, we pay homage to the ancient Indian devadasi.