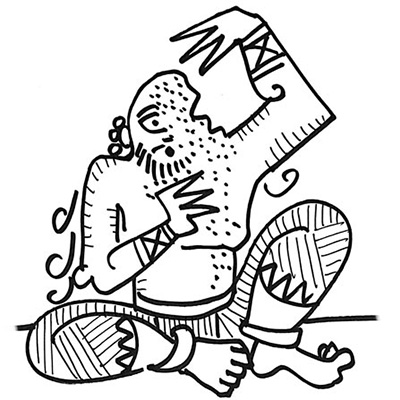 An asura once succeeded in invoking Shiva through severe austerities and secured a boon. ‘Let all that I touch be reduced to ash,’ he said. Shiva granted the boon and the asura went about touching everything in sight: every tree, every bird, every beast, reducing all living things to ash. He then decided to test his powers on Shiva himself. Shiva, realising what he had done, ran. And the ash-demon, or Bhasmasur, chased him. Finally, Shiva sought the help of Vishnu, who tricked the demon into touching his own head. The demon did as advised, and ended up as a pile of ash.

Some people believe this story was composed by Vishnu-worshippers to distinguish the shrewd Vishnu from the gullible Shiva. Some others believe this story was meant to challenge the increasing obsession with ‘equanimity’ and ‘meritocracy’. For, Shiva does not distinguish between devas and asuras and treats all people as equal and gives everyone whatever they ask. The asura, through merit, had managed to invoke Shiva and had earned the right to a boon, and so he had asked for it. The principles of equanimity and meritocracy were followed. But it backfired, for Shiva did not bother with asura’s intent, or the tendencies of the asura. He ended up becoming a victim of the villain he had so innocently created. But, if Shiva had held back the boon on grounds of the asura’s tendency or personality, would he not be accused of being a prejudiced patriarch?

In politics today, we are seeing a whole bunch of bhasmasurs, created innocently and not-so-innocently by powerful people, either to help themselves or harm others, only to find themselves being attacked by the monsters they created.

We hear stories of how America created, funded and supported terrorist groups in Afghanistan to counter Russia. These very groups have now turned their guns on America. Bhasmasur!

Europe, keen to demonstrate its ‘developed’ values of diversity and equality, invited various ethnic groups to be part of its society. These immigrants found it difficult to assimilate and refused to embrace the secular and liberal values of Europe. Torn between old traditional values, and modernity, they have become fertile breeding grounds for the most violent forms of radical Islam. Bhasmasur!

Hindu radical groups turned private beliefs on cow worship into public anti-beef policies in order to establish supremacy over Muslim and Christian groups, who were seen as eroding the Hindu way of being for a thousand years. Today, this has transformed into a sinister form of cow vigilantism, affecting the poorest sections of society, that is spinning out of control, overshadowing the Government’s development agenda. Bhasmasur!

Indian entrepreneurs, to prove their status in their circles, have been sending their children to study in America and Europe. Having tasted life in the West, the children are not interested in returning to India, or taking over the family business. They cannot handle the chaos of India like their forefathers and seek the discipline and homogeneity of Western societies. What was done to dominate relatives and friends has now ended up adversely impacting the future of the family business. Bhasmasur!

What goes around seems to always come around. We can call this as karma, an inevitable outcome of nature’s cycles, or see it as retribution of God who has a sense of humour.