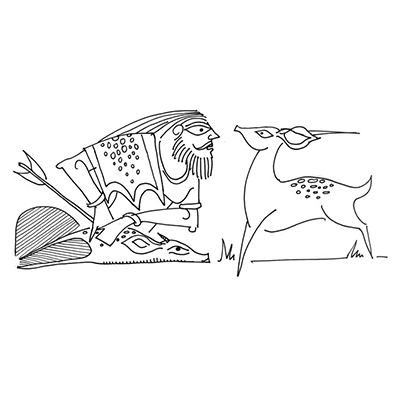 Ancient India was known as Arya-varta, or the land of the noble people. In the early scriptures, the extent of this region was described as the forests where the black buck roamed. Hunting deer, the black buck, was the favourite pastime of kings in Vedic times. The rishis often used deerskin as clothing and as mats to sit and sleep on.

The deer contributes to many a crisis in the epics. In the Ramayan, Sita is drawn to a golden deer and asks Ram to fetch it. Her desire for the deer is indicative of forthcoming trouble. The deer turns out to be a shape-shifting rakshasa, Marichi, who draws Ram, and eventually, Lakshman, away from Sita, enabling Ravana to kidnap her. In the Mahabharat, the arani sticks of a hermit, that he uses to churn sacred fire for yagna, gets entangled in the antlers of a deer. The Pandavas go in search of the deer, and during this hunt, encounter the poisoned lake of the heron that kills them all. They are revived only after Yudhishtira is able to answer questions of the heron, which turns out to be a yaksha, and a form of Yama.

Overconfident hunters in the two epics trigger a crisis. In the Ramayan, Dashrath accidentally kills Shravan Kumar during a deer hunt. When his old blind parents learn what Dashrath has done, they curse him that he will die from the pain that follows when a parent loses his child. The curse manifests itself when Ram goes into forest exile and Dashrath dies of heartbreak. In the Mahabharata, Pandu goes hunting and shoots a deer ignoring the fact that it is mating. The arrow strikes them both. The deer turn out to be a sage called Kindama and his wife who had taken the form of deer to enjoy lovemaking in the open. Kindama curses Pandu that he will die the instant he tries to make love to his wife, which is why his wives are forced to call the gods and have children by them.

With the rise of the doctrine of ahimsa or non-violence, the hunting of deer for sport came to be frowned upon. And so in the Ramayan, Sita requests Ram not to hunt deer for sport, and Ram argues that it is the hobby and habit of kings. In the Mahabharat, Pandavas leave the Dwaita forest and return to Kamyak forest after the deer there appear in Yudhistira’s dream and complain that the excessive hunting of deer by Pandavas is causing their population to decline.

In the Vedic texts, the deer becomes metaphor of the restless mind that is pinned to the sky by Rudra, the Vedic form of Shiva. Tamil images of Shiva often show him holding a deer in his hand, thus relieving the ‘mind-deer’ of anxiety. Poets used the deer to embody our desires, and the hunting of the deer as a metaphor for yoga, with the bow and arrow representing simultaneous balance and focus. But, in the epics, cocky overconfident hunters are hardly yogis, and the deer they hunt often turn out to be trouble in disguise.