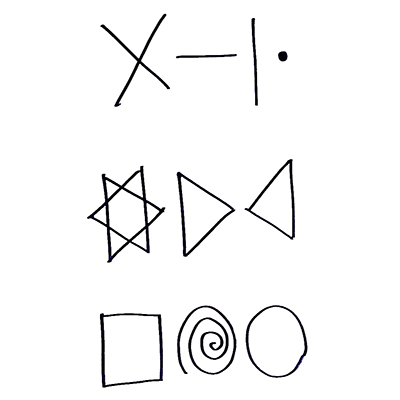 Tired of the daily barrage of political and Bollywood gossip, I turn my attention to sacred art and realise that they communicate profound, timeless ideas. Ideas have no form. They are nirguna. They can be given form, turned saguna, using sound. Thus words or mantras come into being. They can also be given form using gestures or mudras. They can also be given form using diagrams or geometrical patterns known as yantras, often associated with Tantra. If one pays attention to ritual motif especially in rural India, one finds a whole range of visual vocabulary used to communicate a whole set of ideas. Following are a few of them.

The dot or bindu is a popular symbol indicating potential and possibility. It represents the beginning of something. Multiple dots are used to depict a set of deities. For example, three dots can represent Brahma, Vishnu and Shiva or Lakshmi, Saraswati and Durga. Seven dots represent the seven mother goddesses. Ten dots can represent the ten avatars of Vishnu.

The image of the four-armed Vishnu is associated with various geometrical symbols. The conch-shell is the spiral. The wheel is the circle. The mace is the line. The lotus is created by squares – two squares intersecting each other create the perfect eight-petalled lotus.

The geometry itself has no meaning. Meaning is given to the art by the artist and by the observer of the art. One can dismiss geometry as secular meaningless creations or react to them by recognising their sacred nature. For generations, village women have used sacred geometry to decorate their mud houses during festivals. Through this they have communicated ideas that we otherwise only find as words in lofty books written by men, restricted to men. Both communicate the same formless idea, but we choose to dismiss the geometry of illiterate rural folk as superstitious talismans and the words of literate priests as embodied wisdom.