Beheading you, beheading me 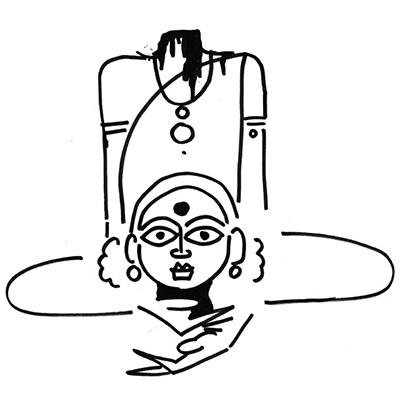 Have you been noticing the rising number of politicians and ‘religious leaders’ who seem obsessed with lopping off heads: either their own or that of others. Are they influenced by tales of head-offering that we find in the Puranas?

It all starts with Rudra, the fiercest form of Shiva, who wrenches off the fifth head of Brahma that mouths profanities on seeing the Goddess. The head, or kapala, sears into Shiva’s palm, transforming him into Kapalika, who has to wander the earth and find a place where he can rid himself of the head in his hand. Liberation happens when he washes his hand in Kashi.

The same theme is repeated when Virabhadra, another form of Shiva, beheads Daksha, who insults Shiva, causing Daksha’s daughter and Shiva’s wife, Sati, to commit suicide. In art, the Bhairava form of Shiva is often shown as a cherubic child holding a human head in one hand or bedecked with a garland of skulls (munda-mala).

In folk traditions, it is Bhairava himself who is beheaded by the Goddess (as in the tale attached to Vaishno Devi temple of Jammu) for his persistent impertinence. Bhairava apologises and so, on the instructions of the Goddess, his head becomes worthy of worship.

The Goddess herself in the form of Kali wears a string of male heads around her body. As the Goddess Kotravai of Tamil literature, associated with battlegrounds, she accompanies Kartikeya, the warlord son of Shiva. There are many folk tales such as Patala-Bhairavi and Malati-Madhava where tantrikas offer human sacrifice to Kali. In Adbhuta Ramayana, Mahiravana seeks to offer Ram’s head to Kali.

Perhaps the most powerful image of self-decapitation is that of Chinnamastika, the goddess of the cut head. She beheads herself and the chopped head drinks the blood spurting out of her own severed neck. She does this while seated on a copulating couple, thus embodying the violence and sexual principles of nature.

Then there are tales where heroes (vira) who offer their head to a God, or Goddess, in order to display devotion or obtain fame. In Tamil Mahabharata, Aravan offers to be beheaded if it ensures victory of the Pandavas. In the Mahabharata narrated in the Rajasthan area, Barbarika or the son of Bhima, offers his head to Krishna to enable victory for the Pandavas. In both these tales the hero asks that his bodiless head be placed on a vantage spot, either a mountain top or a tree, from where he can see the battle at Kurukshetra.

The idea of a vira offering his own head to Durga is popular theme in calendar art. In the early 20th century this metamorphosed into patriots offering their head to Bharat Mata, literally on a plate. This is an inversion of the European tale of Thugees. While Western novelists popularised the myth of Indian thugs beheading unsuspecting travellers and offering their heads to Kali, the nationalist writers countered it by speaking of patriots who offer their own heads as martyrs in the service of the motherland.

These tales can be taken symbolically as sacrifice of pride or ego. Or perhaps they are visual indicators of occult tantrik rituals that involved human skulls. But many love to take them literally. These include Bollywood/Hollywood filmmakers who love to show the macabre side of India, as well as religious radicals whose political masters have valourised and glamourised bloodlust, perhaps mimicking the global vocabulary of religious and state-sponsored terrorism.