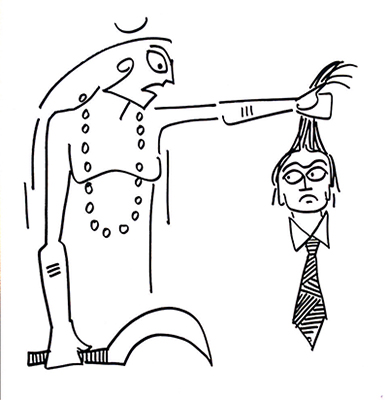 By Devdutt Pattanaik
15th May, 2014
The Times of India

In Biblical mythology, God creates the world. The world functions, or should function, according to His rules. Greek mythology, that is highly individualistic, opposes this idea of a creation being subservient to the creator. It believes that the creation can take care of itself, and does not need the creator. From here springs the value placed in modern management encouraging the entrepreneur promoter (the creator) to distance himself from his business (the creation) and create instead a self-sustaining professionally-run institution.

Brahma, the creator in Hinduism, is also not worshipped. One can argue because even in Indian thought a creator has no value once creation has taken place. But Vishnu, the preserver, is worshipped and so is Shiva, the destroyer, making one wonder if we are getting the message or force-fitting Indian thoughts in a Western template.

God of the Bible means something quite different from God in the Puranas. God in the Bible creates the tangible material world outside (the enterprise). God of the Puranas creates the intangible mental world inside (the mind of the entrepreneur). This value placed on the mind distinguishes Vedic thought, hence Hindu, Buddhist and Jain thoughts, hence Indian thoughts, from Biblical and even Greek thought that form the foundations of Western thought, hence Modern Management. As a result while Western management principles focus on the institution and action points, Indian management principles focus more on thought. The premise is: when the thoughts of entrepreneur change then everything in the enterprise changes. Indian management tends therefore to be more focused on psychology than on activity.

Today, increasingly, leaders are recognizing the value of psychology in business. The hurdles faced by ideas such as ownership and integrity lies in human psychology. We rarely pay attention to the mind of the leader, or the follower. In fact, many argue that leadership is but a set of skills that can be learned. Very few realize (or are willing to admit) that leadership is also about power and identity, notions that defy measurement hence management control. Vague terms like ‘strength of character’ are used. And it is assumed that those business leaders with huge market capitalization have strength of character. Psychologists may disagree.

All of us are Brahma as we create our own personalized version of reality in our mind just as a chicken lays its egg. This is the Brahmanda, or egg of Brahma. In this egg, we as creators, hold a special position. We are Indra, king of devas, entitled to all the pleasures of life. As Indra, we judge the world around us based on values and measures in this egg. When the world does not acknowledge this exalted position we get upset. We feel denied and deprived. We complain and whine as Indra does when asuras lay siege to his abode. We fight as Indra fights the asuras using strength or cunning. Or, if we are capable enough, we transform into Daksha, the patriarch, who controls everyone around him while ensuring he makes the rules.

Shiva beheads this rule-enforcing Daksha as he is indulging his hunger instead of exploiting the very human ability to outgrow all hunger. Shiva’s goal is to be the hermit, one who has no hunger, desires, wants or needs. Beheading is a very visual mythological metaphor for yoga, the unravelling of mental knots that makes us cling to our hunger.

Vishnu recognizes that being a hermit cannot be a universal goal. It can be a personal goal and this personal goal can be redirected such that it meets the needs of society. So he indulges both Indra and Daksha through his various avatars, and helps them discover that the enterprise does not exist only to satisfy his hunger, it also exists to satisfy other people’s hunger.

So Brahma is creator because he is driven by his hunger (we can call it drive, motivation, ambition). Shiva is destroyer because he destroyer of his hunger. Vishnu is preserver because he appreciates the shortcomings of humans and enables others to satisfy their hunger while outgrowing his own. He thus becomes one who acts like a householder but thinks like a hermit or raja-rishi.

In the (forgotten) Indian approach to enterprise, the purpose of enterprise is not to satisfy the promoter’s hunger. It exists to satisfy the hunger of society: customers, vendors and employees. It also exists to enable the promoter outgrow his personal hunger. The two goals are inter-linked. You cannot focus on others’ hunger unless you work on outgrowing your own.

Modern Management exiles such thoughts into the realm of ‘spirituality’ and refuses to acknowledge this as a business lever. Perhaps that is why it struggles with ideas like ownership and integrity and wonders how greed can be curtailed by processes and charity encouraged through outsourcing. In Indian thought, this transformation of Brahma through Shiva to Vishnu is a great business lever, for when you are truly smart (Vishnu), you can always attract the money (Lakshmi).

This article is also listed under Modern Mythmaking