Baby on the Banyan leaf 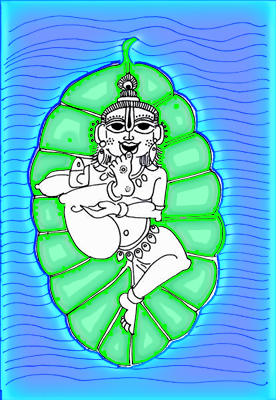 Markandeya was no ordinary sage. He had been blessed with immortality. Perhaps so that he could see and report what no one else had seen. Only he witnessed Pralaya and lived to tell its tale.

Pralaya means the end of the world. Hindus believe that just as plants die, animals die, humans die, and so does the world. The moment of death of the world is marked by the rising of the oceans. Waters rise to submerge the continents and the mountains, drowning every forest and river valley and desert and island. Nothing survives this great deluge. Markandeya witnessed this sight and was filled with fear. But the waters did not pull Markandeya down. He stayed afloat mysteriously.

Then Markandeya saw a strange sight. He saw a Banyan leaf cradled by the waves. On it he saw a radiant baby gurgling happily, sucking his right big toe. The child inhaled deeply. Markandeya found himself being sucked into the baby’s body through his nostril. Within, to Markandeya’s surprise, was the whole world, all the realms, the Lokas that stand above the sky and the Talas that are located below the earth. Surrounding these realms were oceans. In these realms were mountains and rivers and forests and all types of living creatures — plants, animals, humans, Devas, Asuras, Nagas, Yakshas, Rakshasas, Apsaras, Gandharvas. It was as if Pralaya had never happened. Every one lived as they did before, oblivious of the great calamity outside the child’s body.

Markandeya then found himself being exhaled out. He was back in the waters, surrounded by the waves, watching the baby gurgling happily on the Banyan leaf. He realized he was being given a message, a silent symbolic message. It was up to him to decipher it.

Outside the baby’s body was death, inside was life. As long as Markandeya was outside, he experienced fear and insecurity, within he experienced wonder and security. And the baby simply gurgled, unafraid and confident, fully aware that life and death were two aspects of life, rising and falling like waves in an unending ocean. The baby was God who saw the events as they were, without expectation or prejudice, unlike Markandeya.

Markandeya realized Pralaya is both real and metaphorical, objective and subjective, marking the moment when everything collapses around us, all structures break down and nothing exists to support us, when we are left with nothing to hold on to. The only thing that can take us through, like a raft, like the Banyan leaf afloat on the waves, is our faith. Faith in what? Faith in an entity that defies all change and transformation. Not everyone may have experienced this spiritual reality but everyone can imagine it. It is a state where there is no death, no change, no restlessness — only stillness, silence, serenity and immortality. This is represented in sacred art as the Banyan tree, which is why it is referred to as the Akshaya (indestructible) Vat (fig).

That God takes the form of a baby is a marker of renewal and innocence. The world collapses when innocence and purity is lost; it will be reborn once again, fresh and innocent. Why was the baby sucking his big toe? In the Purusha Sukta hymn of the Rig Veda, Markandeya knew, society is defined as a living breathing creature (Purusha) and not an impersonal organization. The head was constituted by Brahmins (philosophers), the arms by Kshatriyas (warriors), the trunk by Vaishyas (traders) and feet by Shudras (laborers). Wisdom is celebrating the whole body, especially the neglected feet. The innocent baby loves the foot and suckles on it. It does not see the feet as inferior or dirty or inauspicious. Such judgements are cultural; a child has no clue about them. Society creates values that result in one group of people justifying their domination over and suppression of another group of people. Society creates values where the head is celebrated and feet exploited and ignored. When this happens, society collapses and Pralaya follows.

What is significant also is that the right big toe is being suckled and not the left big toe. In symbolic terms, the left side of the body which is the side of the heart is associated with material reality and the right side is associated with spiritual reality. The baby looks at the spiritual side of things. He knows that differences between philosophers, warriors, traders and laborers is just superficial, of the mind and matter, of the flesh and social station. These are temporary and contextual. What is common and permanent in all of them is the soul, the spiritual reality that lives in the flesh of all those who inhabit society, from the highest to the lowest,the richest to the poorest, the strongest to the weakest. Within every flesh, is divinity. The fool focuses on the flesh, the wise focus on the soul. The fool therefore will encounter Pralaya outside divinity, the wise will always enjoy tranquility inside divinity.