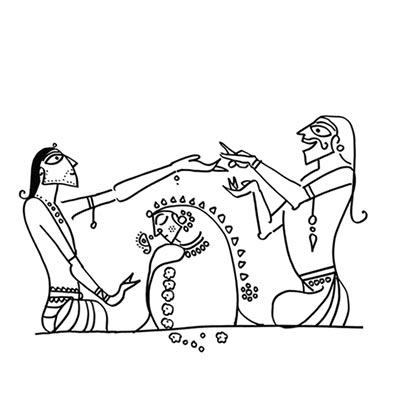 An acquaintance of mine, good-looking middle class gay man, is getting married. His wife will be a homo-wife. For he is a homosexual, a closet one, who loves his men and does not plan to shed the ‘habit’ after marriage. The Supreme Court is to blame for my stay in the closet, he says. So many straight men sleep around after marriage, is his argument and he even adds, with a chuckle, at least I am not going to be unfaithful with another woman. He will eventually insist that his wife should direct her rage at his mother for the marriage for it is under his mother’s pressure that he agreed to this marriage. Thus by blaming the Supreme Court, adulterous behaviour of straight men, and his mother, he shirks all responsibility for the horrible thing he is about to do – willfully ruining a girl’s life. He does not mention the fat dowry, like most Indian men.

Unlike Nirbhaya, who was raped and brutally killed, the homo-wife will simply suffer a life sentence a passionless loveless marriage, sanctioned by law and religion, to a man who touches her only because it is his duty, and imagines men as he tries hard to give her a baby so that she, and his family, leave him alone. If challenged, he will insist he is actually bi-sexual and can ‘perform’ easily with her and make her happy, no better than most Indian heterosexual men. The homo-wife will be part of charades in family functions wherever everyone, except her, will know the proclivities of the husband. The homo-wife will be –like Nirbhaya –held responsible for her situation, by the perpetrators of the non-crime. Only in her case it will be about not being woman enough to arouse adequate desire in him. Unlike Nirbhaya’s parents, her parents will not be proud of her if she fights back. Suffer silently, they will say. We don’t want to be the laughing stock of the community.

In the Mahabharata, when the wife of Shikhandi discovers her husband is a woman, she complains to her father, the king of Dasarna, who threatens to destroy the kingdom of Panchala with his army. Shikhandi then ‘converts’ into a man using a Yaksha’s help. Many parents are convinced marriage will ‘convert’ their son, magically turn him into a heterosexual, maybe with a little help of breathing exercises provided by Baba Ramdev!

The term ‘homo-wife’ is emerging in China where millions of women are not willing to stay quiet about the fact that their husbands are gay, being forced to marry to give their families an heir, as they are the only son in the family (because of China’s one child policy) and because of tradition (Confucianism states that a man is a failure if he fails to produce an heir). These women are demanding a change in social attitudes, so that women in the future do not suffer as they have.

The homo-wife is a victim. Is the homo-husband a villain or also a victim of society, a spineless weakling who cannot stand up to his mother, for fear he may break her heart, already broken by his father? It is tough not to judge.

This article is also listed under Indian Mythology, Queer, Society