Are Indian courts and activists denying the gods their gender and sexuality? 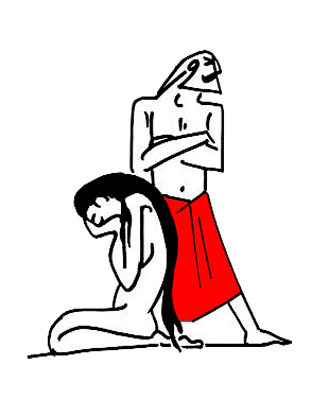 Why are women not allowed into certain temples?

The easy and lazy answer: Because a section of Hindu men who also control temples consider menstruating women as dirty and polluted.

The complex answer: Because the gods enshrined in these temples are seen in local folklore as celibate whose power or siddhi comes from staying away from all things feminine. Typically, these are forms associated with Shiva, who is considered the supreme hermit in Hindu mythology. These shrines include Shani (in Shingnapur, Maharashtra), Ayyappa (in Sabarimala, Kerala), Baba Balaknath (in Harimpur, Himachal) and Kartikeya (Pehowa, Haryana).

Isn’t the complex answer simply an elaborate argument to justify gender privilege? Shouldn’t everyone have access to God?

Phrases and concepts such as gender privilege and equality are powerful levers to twist traditional lore, transform all believers into patriarchal oppressors, put everyone on the defensive and turn activists into saviours. But these saviours, activists and judges essentially assume a singular definition of God — one that is Abrahamic. And therein lies the problem.

The Abrahamic God found in the mythologies of Judaism, Christianity and Islam is decidedly masculine, which is why he is addressed using masculine pronouns, has only men as his prophets as per Islam, and sends a son to save the world as per Christianity, not a daughter. He is the Father in Heaven, whose child is born of a virgin, as he looks down upon sex — even destroying Sodom and Gomorrah for their excessive sexual appetite. In this worldview, God has a gender, prefers one gender to another, but is distanced from sexuality.

In the Mormon version of Christianity, God has many wives, has lots of sex, and has children. And though the church’s official doctrine doesn’t say that Jesus Christ was married, its “members are free to believe as they wish” on the matter. For those dismissive of Mormonism, also known as the Church of Jesus Christ of Latter-day Saints, note that the church — founded in the US in 1830 — is one of the most rapidly growing churches in that country.

The conventional Abrahamic understanding of God, influenced by Greek beliefs in omniscient Zeus, informs the global discourse. Increasingly, this understanding of God is being stripped of all gender and sexuality, being seen in abstract terms as an idea, or energy, or force. Even in modern Sufi movements, when the relationship between deity and devotee was traditionally seen in terms of lover and beloved, there seems an obsessive need to insist that the relationship is pure, which is supposed to mean non-sexual. Implicit in this belief is that sex is dirty. Menstrual blood is considered dirty too, and nudity is frowned upon. In fact, people are convinced that only “primitive pagan cultures” have gods with a defined gender — and sexuality. In so-called higher cultures, there is only spirituality.

Guess where Hindus are anxious to locate modern Hinduism?

God in Hinduism is both without form (nirguna), and with form (saguna). When it comes to form, God could be male, female or androgynous, displaying every kind of sexuality including asexuality and queer sexuality.

So there are temples where only women are allowed (Savitri Temple in Rajasthan near Pushkar, or Shri Path in Uttar Pradesh’s Chandauli district), and rituals that only women may perform (Attukal Pongal in Kerala, Thiruvananthapuram). There are temples where men, not women, have to bare their chest on entry (Mookambika in South Karnataka), and where men have to dress as women and appear before the Goddess (Kottankulangara Temple at Chavara, near Kollam, Kerala).

Once there were temples where the gods were married to women (devadasis of Tanjore, maharis of Puri) until this was outlawed, where goddesses only accepted eunuchs as her priests (Bahucharaji, Gujarat), where a god willingly served as husband to male-to-female transgenders (Koovagam, Tamil Nadu).

Then there are temples where the goddess menstruates (Kamakhya, Assam) and gods are paraded cross-dressed as women (Brahmotsavam in Tirupati, Andhra Pradesh).

Can there be a rational definition of God?

Faith by definition is not supposed to be scientific or rational. It follows its own subjective logic, its own architecture, populated by virgin births, heavens and hells, sin, salvation and soul. For secular atheists who might be chuckling, note that even ideas such as equality and human rights are appealing ideas, dreams that are forcibly imposed by a so-called civilised democratic society on so-called primitive tribes. In fact, today science, democracy, secularism and nationalism function very much like religions — all look at alternate views of the world as heresy.

In the first phase of Buddhism, Buddha was represented as a symbol (footprint, umbrellas, lotus). In the second phase, Buddha was represented as a beautiful but asexual man. In the third phase, Buddha, or rather Bodhisatva, became androgynous and even feminine. In the fourth phase, Buddha started being seen with a goddess, Tara, or even copulating with her (Yab-Yum images). This happened over a thousand years, and captures the change in Buddhist thought as it moved from Theravada Buddhism through Mahayana Buddhism to Vajrayana Buddhism.

In early Buddhist texts such as Vinaya Pitaka, women were seen as the greatest threat to the path of dhamma. Later, Buddha was seen as a saviour figure, displaying feminine qualities like compassion (karuna). Finally, belief in the power of semen crept in, a belief that would later be qualified as Tantra. In Tantra, retained semen is supposed to provide superhuman powers known as siddhi. Those who acquired it were called siddha. Early Buddhism believed this power could be attained by someone with a male body who simply shunned the allure of the female body. Later Buddhism believed this process could be accelerated by copulating with women, getting aroused but not discharging semen. This is said to cause “reverse movement of semen” or urdhva-retas.

But when we talk of Buddhism today, we talk of it being either spiritual or revolutionary, but shun all conversations related to gender and sexuality and beliefs in semen-power. Why? Is it Christian guilt at work, native shame, or just secular embarrassment?

Tantra is a common tributary to Buddhism and Hinduism. Similar beliefs of gender, sexuality, and semen movement exist in various schools of Hindu thought. Tantra acted as a counterforce to asceticism of Vedanta. If celibate Vedanta teachers found a role model in the brahmachari or celibate Hanuman, who refuses to marry so that he can serve Sita and Ram, the Tantrik tradition insists on the character of Radha, who though married to another man, dances and sings with Krishna in the forest at night, and demands he satisfy her. It is not a relationship where she is victim of the masculine gaze, as we discover in Gita Govinda, but one where she is the power, the Shakti, whose demands enliven the divinity of God.

But all these ideas around the gender and sexuality of gods and goddesses were suppressed in the 19th century as Hindu reformers tried to purify and purge Hinduism, win the approval of the Victorian gaze. God and Goddess became Father and Mother, without any sexuality, so they could not possibly have desire for male or female devotees. Temple images of voluptuous goddesses and virile gods were covered with sandal paste, hymns describing their beautiful bodies and virility and fertility were studiously ignored. Celibacy was projected as sacrifice for the greater good of humanity (as in the case of Jesuit missionaries), rather than a ritual practice to gain semen-power. In fact, when American academicians drew attention to some of these Tantrik ideas in their books, Hindu activists rose in rage and declared them as perverts, asked for bans and burnt their books.

Ironically, this de-sexing of gods and goddesses, made it difficult to explain the exclusion of women from the presence of celibate gods. If there is nothing sexual about Hindu gods, then why the problem with women? Explanations became pathetic — such as “menstrual blood is dirty”. No one dared speak of “semen power”. It is not that Hindus are not aware of these ideas — it is just the elephant in the room. We are worried about what will people say. That we still value celibacy and semen-power, that we do consider brahmacharya as the fuel to tejas (holy radiance) and siddhi (spiritual power) is the reason why our godmen make sure their celibate status is an integral part of their brand architecture. The godwomen also insist they never did or no longer menstruate.

Perhaps we could argue then that women demanding entry into the shrine of celibate gods is the goddess pushing back: demanding she be acknowledged in times when celibate saffron-robed bearded men are taking centre stage as self-styled leaders of Hinduism. We can declare that this is Hinduism reframing itself as it has several times in its long history.

The question is: How far will we go? Will the courts now allow women’s akharas and transgender akharas to thrive alongside all-male akharas? Can we imagine a day when the shahi-snaan or royal bath at the Kumbh mela will be done by holy menstruating women, and not remain exclusive to celibate ash-smeared Naga sadhus? Or are these issues too volatile for the courts?

Transgression is always valorous. The act of women entering the shrine of gods who have traditionally shunned women as per traditional lore is seen as a triumph, an end to that patriarchal tradition of seeing women as impure. But what will be the impact on the deity’s celibacy? Will the presiding deity be affected by the presence of women? Will their siddhi, which drew devotees to them, wane over time? Or are we to assume that in the 21st century, all gods are gender-neutral, stripped of all sexuality? Do we want to wipe out Tantrik tributaries of Hinduism, or simply deny them and walk the path of sanitised New Age Buddhist spirituality?

Who can answer these questions on the gender and sexuality of our gods and our religion? I guess, to unravel the mysteries of Hinduism we have to turn to the honourable judges of India and their understanding of the holy Constitution. No one else is allowed.