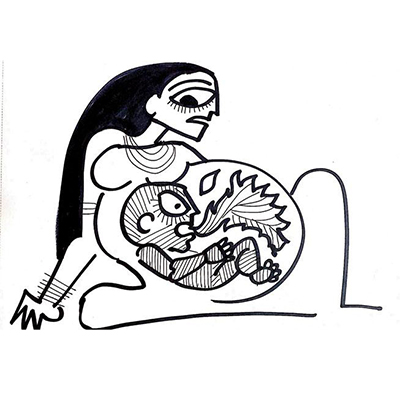 Puranas refer to stories of three rishis who, while still in their mother’s wombs, get very angry at the cruelties, injustices and meanness of people around them. So, they try to destroy the world. They are stopped in time by their parents, or elders.

The gods had taken Dadhichi bones to fashion a weapon called the Vajra. With this weapon, their king, Indra, could defeat the Asura Vritra. But, it had cost Dadhichi’s life. His wife Swarcha gave birth to Pippalada, under the Pipal tree. When he learnt about how his father died in the service of the devas, he got very angry. He planned to destroy the devas with his anger. His mother, however, begged him to remove anger from his body and cast it away, because anger is unfruitful. Pippalada did as told.

Rishi Vasishtha’s son, Shakti, was killed by a rakshasa who was goaded to do so by Vasishtha’s arch-rival, Vishwamitra. Vasishtha was so heartbroken at his only son’s death that he tried to kill himself, but the river in which he leapt refused to drown him. Shakti’s widow, Adyashanti, was with child and Vasishtha felt his unborn grandchild’s rage. He told the unborn child, named Parashar, that anger solves nothing. It only perpetrates a spiral of rage and violence that ends up destroying the world. Enlightened by Vasishtha’s words, Parashar got rid of the fire.

Rishi Bhrigu served the Asuras. While he was away, his wife was abducted by an Asura called Puloman. The child in the womb got so scared that he slipped out of his mother’s womb. That child came to be known as Chyavana. The same thing happened when Chyavana’s wife faced a lot of atrocities at the hands of the kshatriya kings of the Haihaiya clan. Their son Aurva, slipped out of his mother’s womb, but not in fear. He was angry. He spat out fire that threatened to destroy those who threatened his father and his mother. Aurva’s mother asked him not to do so, but instead expel the fire elsewhere. So, Aurva asked the sea to come towards him and receive it. The sea refused to break its shoreline. So, the child transformed his anger into a fiery horse called Vadavagini, and told the fiery horse to go and live under the sea.

The heat of that submarine horse produces mists and the fogs. The submarine horse now waits to erupt like a volcano, and destroy the earth, when the kings of the earth become so cruel that their atrocities become a burden on earth. Some say this horse will be the horse of Kalki.

These stories emerged at periods of conflict between non-violent rishis and their violent patrons, the rajas, from various communities, such as Haihaiyas, devas, and even rakshasas. Perhaps, this conflict was caused when the rajas refused to fund the intellectual and spiritual pursuits of the rishis, and turned towards Buddhism and Jainism. Perhaps, the rishis did not like the rajas choosing personal ambition over governance. How much of this is history and how much of it is a metaphor is a matter of opinion and great debate.