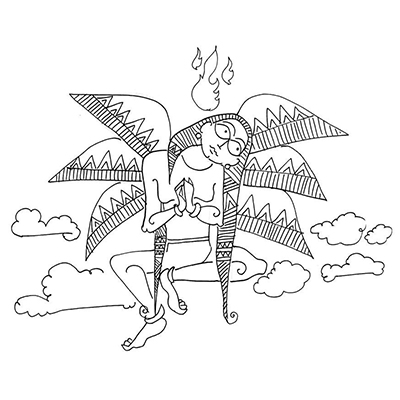 In Christian mythology, the Devil is an angel who disobeyed God. But, in Islamic mythology, angels do not disobey God. Creatures of light, they have no free will, and they bowed to Adam when God told them to. For them the Devil, Iblis, is a djinn, hence capable of disobedience. Like Christians, angels are a part of Islamic lore, but we don’t know much about them as Muslims forbid their depiction in art. When one goes to a mosque, one sees geometric art, never human forms, as depicting human forms is forbidden in Islam. But, not so in a Church. Hence, we don’t get to visualise Islamic angels as we visualise Christian angels such as seraphim, cherubs and archangels.

Very few angels are mentioned in the Quran. Most names come from later Middle Eastern folklore. The Christian Gabriel becomes Jibra’il, Michael becomes Mika’il. The former is the messenger, who Prophet Muhammad first encountered, who guided the Prophet in many ways, and who led angels in war at the Battle of Badr, that enabled the Prophet Muhammad to defeat his enemies and return to Mecca. The latter is the angel of mercy, linked to righteous conduct and justice.

Azrail is the angel of death, horrifying to the false and comforting to the true. He sits under a tree on whose leaves are written the name of all living creatures; when a leaf drops, it is time to fetch their souls. Israfil awaits God’s nod to blow the trumpet to announce the Day of Judgement. The first sound will end the world, the second will resurrect the dead so they can present themselves for final judgement (Qayamat).

There is Habib, the angel who counsels humans who pray. Raad is the angel of thunder who watches over clouds and storms. Kiraman Katiban watches and records deeds of humans. Hamalat al Arsh carries the Throne of God and encircles it in prayer. Muqqabit is the guardian angel who ensures no human dies before it is time for death.

Some angels exist as pairs. Malik is the guardian of hell who never smiles, and Ridwan maintains the gardens of paradise and is always smiling. Munkar and Nakir are caretakers of the grave, and the first to question those who have been recently buried if they have been faithful to God’s laws. Harut and Marut, who succumbed to temptations, and hang upside down in Babylon, teaching astrology and fortune telling, warn those who seek such occult powers of their futility.

The existence of supernatural beings, angels and djinns, in Islamic lore reminds us that all humans yearn for powers that help them cope with fears about life and death. Many imagine God as a king with courtiers and knights, with gardens and prisons, and this is projected in stories and songs. They may not make scientific sense, but they do make powerful psychological sense. Humans need to feel their lives are being watched and their death will be supervised. When we read other people’s mythology, we have a choice: to mock them as false and irrational, or to empathise with the insecurities and anxieties. Everyone wants to argue if myths are true or false; but what we need is to accept that myths help cope with the horrors of life, that even science, or logic, cannot get rid of.