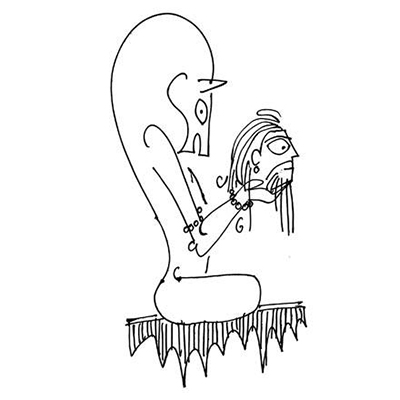 In Vedic mythology we hear how the Ashwin Kumars were unsuitable gods, not allowed to partake the Soma offering. To get the offering, they approached Dadichi, who said that if he chanted the verses, then his head would split into a thousand pieces. So, the Ashwins replaced Dadichi’s head with that of a horse. With the horse head, Dadichi made the offering. Dadichi’s horse head split into a thousand pieces, but Ashwins, rich with Soma, replaced the head. Ashwins were now suitable gods, one of the 33, always cheerful, saving people from shipwrecks and rescuing children thrown in wells by mean brothers.

But, the unsuitability remained. In Mahabharata, Kunti invokes Yama, Indra and Vayu to get her sons, while Madri invokes the Ashwin twins. Madri’s sons, Nakula and Sahadeva, are always overshadowed by Kunti’s sons, despite their beauty and intelligence. Indeed, they are the last to have access to Draupadi and the first to be gambled away in the game of dice. Like the Ashwin twins, Nakula and Sahadeva are never mean, constantly helping their brothers in trouble. Just because they were treated as outsiders, they do not treat others as outsiders. They don’t carry the meanness forward. They don’t render others unsuitable.

But, in our society, we see how people who write ballads of how they were abused as children end up taking revenge by being abusers themselves. The ‘unsuitable’ boys and girls, once successful, invariably create frameworks that determine who is allowed in and who should be kept out of their shows and parties. Kyunki saas bhi kabhi bahu thi, as someone would say.

As a child, we were told that Batman was a hero and Joker was a villain. But, Hollywood is now making movies where Batman’s wealth makes him a villain and Joker’s poverty and social isolation makes him a victim. Such storytelling is not about complexity of human condition, it is often used to excuse meanness and villainy.

So Ravan’s abduction of Sita is ‘justified’ through Surpanakha’s mutilation as the hands of Sita’s bother-in-law, Lakshman. “They were mean to him, so he has a right to be mean to them.” This is called justice. It is also called vengeance. Feminists focus on Surpanakha’s mutilation by men (problematic as it is) but totally sidestep her disregard for marital fidelity, almost as if soliciting a married woman/man is perfectly fine, since marriage is a ‘patriarchal’ institution. Thus, Ravan’s lust of Sita, a married woman, and Surpanakha’s lust for Ram, a married man, is transformed into ‘love’. Ram’s rejection of Sita is seen as misogyny; his refusal to take a second wife is not even acknowledged. Thus, Ram is deemed the unsuitable god, and Ravana a suitable demon.

We live in times when privileged people are seen as the villains. And they often are. But those who want to mock chat ‘ragging’ show celebrities, want to be chat show celebrities, cracking those same mean jokes with their guests. They don’t hate the party. They want to be in the party. They want to be the host, the guests, the insider. They want to be worshipped despite faults. So, they write biographies of how they were ill-treated as children for their looks in order to get the sympathy, the followers and eventually the contracts that allow them to sell whitening creams and blackening hair dyes, and earn the attention that grants them permission to ill-treat others with alacrity. This is the karmic cycle of viciousness, that the Ashwins and Ram break free from.

This article is also listed under Ramayana, Society