An Eclipsing of History That Frightens Many Hindus 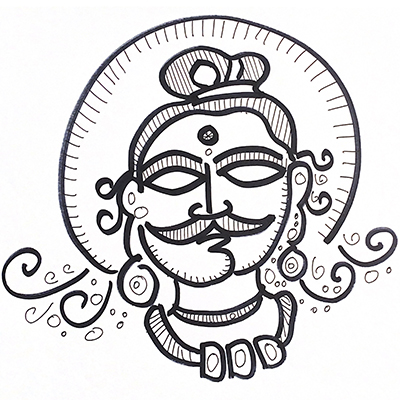 People forget. If you go to Northwest Pakistan today, the region on either side of the Khyber pass, few will remember that in the Bronze Age, 4000 years ago, it connected Harappan cities to settlements in North Afghanistan, which was the source of the much traded blue stone, lapis lazuli. Then 2000 years ago, this was the land that was associated with the Silk Road and had a sizeable Buddhist population. This was the land of the famed city of Takshashila or Taxila linked to the mythical Naga Takshaka and the historical Ashoka. A few people will remember Alexander though, who marched through here 2300 years ago, but mainly because Alexander, or Sikandar as he is known locally, is part of Islamic lore, even seen as a prophet by some.

In India, Gandhara is famous because of the Mahabharata that tells the story of its princess Gandhari who blindfolded herself when asked to wed Dhritarashtra, the blind king of the Kuru clan that controlled the land near modern Haryana. In old Sanskrit literature, kings connected to this part of the subcontinent, such as Madra and Kekeya had names, or titles, such as Ashwapati, or lords of horses, or Ashwasena, the horse army, as these were the lands through which horses were imported into India from Central Asia, and elephants exported to Persian kings. Some Sanskritists trace the name Afghanistan to the Sanskrit ‘ashvaka’ or horse-rider.

We also know that the Gandhara region was a thriving centre of Buddhism. In fact, the earliest Buddhist art comes to us from the Gandhara region and shows definite Greek influence. The earliest images of Buddha and even Bodhisattva are similar to Greek gods. Their expression, their stance, the drapes of fabric, the nimbus (halo) behind their head, all indicate Greek influence. In fact, in some images, Heracles appears as the guardian of the Buddha.

Gandhara was a province connected with the Persian, Mauryan and Indo-Greek (Yavana) Empires, and later was controlled by Scythians (Saka), Parthians (Pahalavas) and even Hunas, who came from Central Asia. It was the centre of Buddhism, right up to the 8th Century AD. According to some legends, Padmasambhava, who took Tantrik Buddhism to Tibet, was born in this region in the 10th century, though now there is increasing evidence to suggest he may have migrated to the Himalayan region from Odisha via Bengal. By the 10th century, Buddhist influence in this region had waned, resulting from Huna attacks and rise of Islam.

Today, if one goes to the Swat Valley, there is no trace of its Harappan, Vedic or Buddhist roots. What dominates it is the local Pashtun tribal culture, overlaid with Islam. The local legends are all connected with Persian lore. As per local Persian historians, Islam came to this region in the 8th century and the local people converted to the faith. This land was known as Khorasan, or the Eastern frontier of the Islamic world, from where the sun rises. In the eastern edge. Beyond was Kafiritstan, the land of infidels, where fiercely independent mountain tribes lived practising polytheism.

Many changes took place here especially after the Ghurids established their empire in the 12th century spanning both sides of the Khyber pass, marked by two towers, the eastern one being Qutub Minar of Delhi and the Western one being the Minaret of Jam in Afghanistan. In 13th century, Mongol terror of Genghis Khan changed the local demographics dramatically. From the 16th century, we hear of the Pathans or Pashtuns, who have their own mythology tracing their ancestry to the ancient Biblical king Saul of Judea.

Pathans do not believe that they were converted to Islam by the Caliphs as claimed by Persian lore. They believe they are descendants of King Saul, whose descendent Afghaun was exiled to Babylon after the breaking of Solomon’s temple. From Afghaun came the name Afghanistan. The first mention of Afghan does come from a 10th century geography book Hudud al-Alam. Some say it means the distant land.

As per oral lore, Afghaun’s children practised a form of proto-monotheism, which was pre-Islamic. Their hero, Qais or Kayus, supported Prophet Muhammad and his fight against the pagans of Arabia. Yusuf was a descendant of Qais. Branches of Yusuf’s extended family fought over the land until they came under the influence of a Sufi, Sheikh Malli, who divided the land and made peace. Thus, the land-owning Pashtuns trace their ancestry to an ancient Biblical hero. They controlled the Khyber pass and the area around Peshawar until the rise of the Sikhs.

Here we see a complete shift in history with no memory of Buddhism, Vedism, or Harappa. There is a complete override of Persian, Arabic and local tribal thought. It is this eclipsing of old memory with new memory that frightens many Hindus. They fear that the way these memories were lost in Gandhara, memories will be lost in Kashmir, a state which continues to deny its Hindu past. This fear energises the political ideology called Hindutva that insists its bigotry is meant to save Hinduism from this imminent threat.