Amritsar: The Lake of Nectar 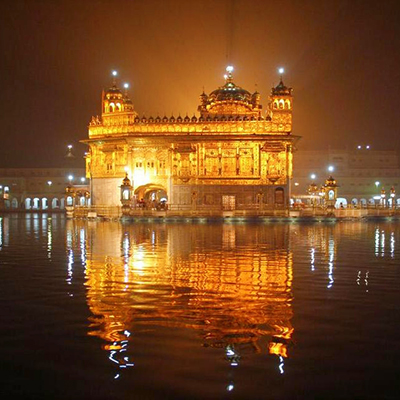 We arrived in Amritsar at night, and went directly to see the beautifully lit Golden Temple.

Why does one visit Amritsar? To see division, or union? The division manifests as the Indo-Pak Wagah border, where sibling nationalistic rivalry is in glorious display.

Then comes the union: when you take a dip in the pond, and enter the shrine, or gurudwara (doorway to the teacher); when you bow before the Guru Granth Sahib (holy teacher-scripture); when you hear the wise words and songs of the gurus and the sants and the pirs from Bhakti and Sufi traditions that constitute the book; when you eat in the communal canteen (langar); when you chant and pray (simran) as you do service (seva), and cook, serve and clean and watch others doing so, irrespective of religion, caste, class, nationality, race, gender, or sexuality, with full humility and piety. Here, humans are connected with God, the divine possibility: the dissolution of all borders, hence hierarchy, domination and power struggles, as fear disappears and there is no need to be territorial.

This idea is embodied in the Mul-mantar of the Sikh tradition that describes the universal oneness, the supreme unchangeable truism, the creator, the sustainer, who is beyond fear, hatred, death, birth, who is self-contained, and manifests as the grace of the guru. Guru Nanak, the first guru of the Sikhs, who lived 500 years ago, composed this.

Sikhism rose geographically, historically and psychologically at the interface of two major religions: Hinduism and Islam. And one can see the two influences so clearly. The name Harminder, for example, is derived from ‘Hari ka Mandir’, with Hari being specific title of the Hindu god, Vishnu, but stripped of all sectarian connotations when used in Sikhism. The kitchens are strictly vegetarian. But unlike Hinduism, Sikhism is highly organised through a clearly defined holy book, where songs present God as formless (nirakar) and attribute-less (nirgun) and which evoke a world of justice without oppression. Known as Adi Granth, it was declared the Guru Granth Sahib, the final guru, by the tenth guru, Guru Gobind Singh, who formalised the religion 300 years ago.

Guru Granth Sahib is placed on a pedestal (takht) and covered with a cloth (rumal) and a chowrie (chaur), or yak-tail flywhisk, is waved over it. In ancient India, the chowrie was reserved for kings only. In temples, it was reserved for Ram only, for Ram is the royal avatar of Vishnu. The Sikh kings, including Maharaja Ranjit Singh who plated Harminder Sahib with gold 200 years ago, denied themselves this honour, to remind the Sikh people that ultimate power rested with the book itself, for whom the chaur was forever reserved.

Right from the start, the gurus of the Sikh faith wanted to end all divisions that fragmented society. There was the religious divide, the caste divide, the class divide, the gender divide. Most of these divides manifested themselves in the act of eating. Hindus did not eat with Muslims, Brahmins would not touch food of Dalits, men would eat food first and then the women of the household. The langar symbolically dissolves these boundaries and hierarchies: everyone cooks and serves and eats together. Thus the Hindu ritual of ‘bhog’ is transformed into a Sikh custom that establishes equality. Of course, activists do point to the caste divisions that are increasingly creeping into modern Sikh gurudwaras, both in India and abroad, with deep divisions between Jat Sikhs and Dalit Sikhs.

Sikhism has consistently valued the householder’s life over the hermits. Marriage and family were seen as foundations of society. The holy book has no songs by female saints, but it repeatedly speaks of gender equality, a radical thought five centuries ago. If the man who accepted Sikhism was called lion (singh), the woman was called lioness (kaur), thus giving her an identity of her own, that is not dependent on her father or her husband. Women have played a key role in the Sikh religion. There is, for example, the tale of Mai Bhago who in the 18th century inspired and changed the mind of 40 army deserters and led them on a suicide mission against the Mughal army that was pursuing Guru Gobind Singh. The 40 soldiers later became famous as the 40 liberated (chalis mukte).

The Guru Granth Sahib has nothing to say on matters related to queer genders and sexuality. In the absence of any guidelines, one wonders what direction Sikhism will take. Will it be influenced by one Janmasakhi ‘B40’ (orally transmitted lore on the life and travels of Guru Nanak) that informs us about, and even presents a miniature painting of, Guru Nanak having a dialogue on the nature of the divine with cross-dressing Sufi sage, Sheikh Saraf, in Baghdad? Or will it follow the trend of Hindu, Islamic, even Christian and Buddhist radical groups that have glamourised conservative values as pure and original? Maybe Sikhism, the youngest religion of the subcontinent, that has always challenged boundaries and divisions and prejudices, can show the more egalitarian way in the 21st century.