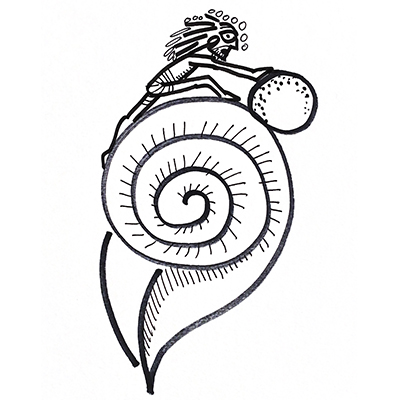 In Greek mythology, we hear the story of Sisyphus. The gods condemn him to roll a rock up the mountain all day, only to find the rock rolling down at night. Thus, he is doomed for all eternity, to repeat the task again and again and again. This is the Greek version of hell, or Tartarus. It represents the modern mindset, where repetitive activity is seen as the worst punishment. Consequently, creativity, newness and freedom become the paradise that everyone seeks. So, the heaven of the gods becomes a place where one is free to do whatever one wants, against the slave who is forced to do the same thing again and again.

This mindset prevails in capitalism as well as communism. Ideologies which are inspired by Greek myths. They became popular in the 19th Century. Sisyphus was condemned by the elite, and the privileged. Everyone craved freedom. Everyone rejected the old way and sought something new and exciting—a new world order. Not a return to the good old days, but the creation of a new way.

The Sunday mass of Christians and Friday prayers of Muslims are repetitive too, as the faithful await the end of the world, and Judgement Day. Repetition here is to remind people of the God who must be obeyed; they law that must be followed. The point of repetition is to secure alignment to a single idea. In Hinduism, Buddhism and Jainism, ritual repetition has a different purpose.

Hinduism, Buddhism and Jainism are based on rebirth. You live the same life again and again or break free. Entrapment happens if you live without insight and believe that the world will align to your will. Freedom comes when you gain insight into how the world will not be controlled by your will. Insight is gained by doing the same task again and again and again, like chanting God’s name, or a mantra, or a ritual, daily, weekly, fortnightly, monthly, quarterly, annually. But with awareness.

When you stir milk, in a repetitive, rhythmic manner, the butter separates. When you repeatedly grind corn, finer flour is produced. When you repeatedly do a task, your efficiency level improves. When you keep doing the same thing again and again, you start seeing details, fine differences, that you were unaware of when you began. By genuinely paying attention to the Ramayana, repeated again and again, you start finding layers of meaning within it. When you listen to the aarti, you gain insight that escaped you before. Repetition thus is not about alignment, but about enlightenment, igniting awareness so you see what no one else saw.

Temple rituals are based on cycles of the moon (month), sun (year), Venus (8 years), Jupiter (12 years). Repetition creates a sense of order. But repetition is linked to change: change of seasons, change of tides. This change is cyclical. But one shift can break the cycle and create a spiral. Hence Vishnu holds in his hands symbols of both options: the wheel circle (representing entrapment) and conch-shell spiral (representing freedom).

In a world that celebrates innovation and invention and believes that a better world is created by rejecting the past, it is important to revisit the past in a repetitive manner and appreciate the power of repetition.