Above many realms of desire 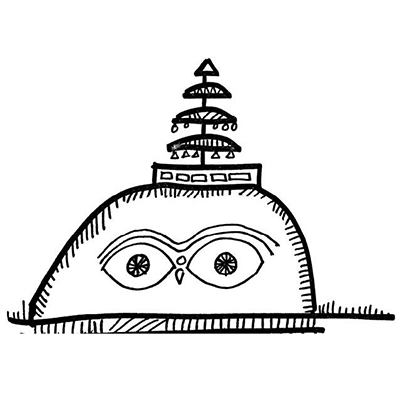 When we study how people imagine the world, and how they express it in art, we understand their world-view. Buddhist stupas crowned with special umbrellas indicate Sumeru, the central world axis and the heavens above it, above which sits the Buddha in a formless state after he attained nirvana.

The Buddhist world can be framed both horizontally and vertically. Horizontally it was imagined as being disc, a series of concentric land and water masses with a mountain in the centre called Sumeru. On its four sides are four continents, radiating like the spikes of a wheel. The continent spreading out on the southern side is called ‘Jambudvip’ in which is located India.

Below the human world are the hells or the ‘narakas’ where people are tortured for doing wrong things, such as treating Buddhists badly, for not upholding dharma, or for being full of desire which makes them behave in a negative or bad way. Then comes the realm of the ‘pisachas’ or the hungry spirits awaiting rebirth, after which there is ‘bhu loka’ where we live along with animals and plants. These are the realms of bad and mixed karmas.

Above this earth as we go up along the Sumeru mountain there is the heaven of the four great kings or the ‘chatur maharajas’ who control the four directions. Above this realm are the heavens of Indra, then Yama, then Tusita, then the Brahmas. These are the realms of good karmas.

Now, the unique thing about these worlds of form is that as you go higher and higher, people grow taller and taller. Along with height there is also increase in lifespan. Also, sexual desire manifests differently. While the gods in the 33 heavens, like the humans below, desire sexual contact, in realms above them, beings can satisfy themselves and produce children just by holding hands or just by glancing at each other or by smiling at each other.

After the realm of desire comes the realm of forms of Dhyana Buddhas, who have yet to give up form completely. There are many realms such as realms of pure consciousness, realms of nothingness, and realms without perception and non-perception. Here, too, lifespan and size expands. Only then comes the realm of the Sakyamuni Buddha who has no form, for he has attained nirvana, and so has no shred of desire, and has become timeless and formless, with no boundaries whatsoever.