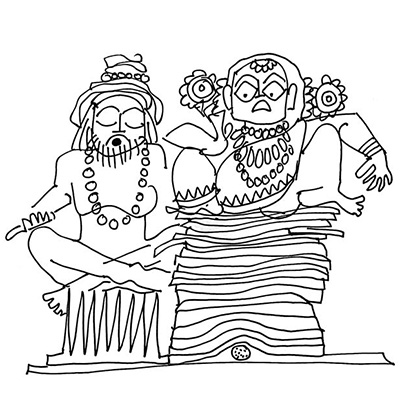 In the 19th century, Hans Christian Andersen wrote the fairy tale of the princess and the pea. A prince wanted to marry a ‘real’ princess and, so, his mother designed a test. Princesses were invited to the house to sleep on a special bed of 20 soft mattresses piled on top of each other. Only one princess complained that the mattress was uncomfortable; something beneath the mattresses poked her all night. True enough, under the pile of 20 mattresses – enough to cause the princess discomfort – was just a single pea.

A similar story is found in the classic collection of Sanskrit tales known as Vetala-pachisi. The Vetala or ghost tells the King Vikramaditya the story of a king with three delicate queens. The first queen faints when a flower falls on her body. The second queen gets burnt by the moonlight. The third is bruised by the sound of pestle pounding in the kitchen. ‘Who is the most delicate?’ asks the Vetala. Vikramaditya says the third as she is hurt by something that does not even touch her.

In both these stories, the women are admired for their oversensitivity. It indicates a fragility that is highly valued, hence greatly sought in the market of materialism.

Contrast these with images of hermits who, it is claimed, sleep on a bed of nails, or who sit so still that they are covered by termite anthills. Here, insensitivity is valued and venerated as an indicator of spiritual power.
The ascetic demonstrates his ability to triumph over the material world, not be influenced, impacted or enchanted by the outer world.

For both, the external is oppressive. While the women seek a man to save them from that oppressive world, the men withdraw from everyone, especially the women, who seem to bother them more than the nails and termites puncturing their skin. The princesses and queens want the princes and the kings to make the world a better place. The ascetics simply abandon this world as the world cannot be controlled and made better.

It will always be a world of pain, pollution and misery. Eventually, when the desire to control the world wields no results, the world is abandoned. The pea-princess becomes the hermit inside the termite hill. We see these pea-princess everywhere: in those shrill conversations of oppression, micro-aggression, and unfairness. Eventually, there is cynicism and rejection of the world, the desire to withdraw into a cave, away from the glare of Twitter.