A Sense of Security 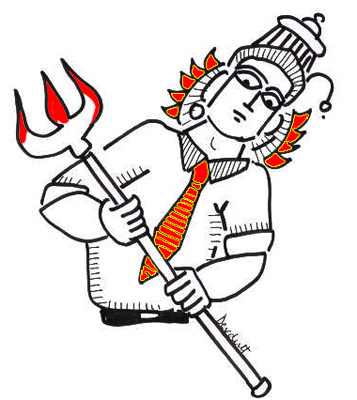 What do we seek from an organization? Wealth? Yes. Knowledge and Skills? Yes. Anything else? Power? Well….we will never admit it but organizations create the framework that allow for various manifestations of power to emerge. They create bosses and subordinates, team members and team leaders, dotted line and solid line reporting…

But power is one thing we never discuss openly. We shy away from it — perhaps because it is not tangible or measurable. Yet empowerment and disempowerment can make or break an organization making it perhaps more powerful than economic and intellectual resources.

In Hindu mythology, all that which can be transacted between two human beings takes the form of three goddesses: Laxmi, Saraswati and Durga. Laxmi is the goddess of wealth, Saraswati is the goddess of knowledge. Durga is Shakti, the goddess of power. The first two goddesses are easy to identify and well acknowledged by organizations. Lakshmi appeals to the wallet and Saraswati to the head. One manifests as topline, bottomline, growth, equity, market capital, pay slip, perks, and reimbursements while the other manifests as intellectual property, formulas, methods, processes, training, learning, and experience. Lakshmi can be given and taken; Saraswati can be given but not taken. But what about Durga? Can she be given or taken?

Durga is shown killing of a buffalo and typically we are told that she is killing the demon, the bad guy, the villain, the evil person and some say, it is the ego. So Durga then becomes about courage and bravery to protect ourselves from threats. But why do we need protection? Who are these threats? Implicit in the idea of protection is the idea of fear. The existence of Durga presupposes that all humans are afraid, and hence are in need of security. For that we need power — weapons to make us feel safe.

Power then becomes the antidote to the poison of fear. In fact, it transforms itself into the currency of all emotions. Give it to create security, take it away to create insecurity. Give too much power and the secure can get arrogant. Everyone knows how power has made people corrupt. Everyone knows how organizations become dysfunctional when employers and employees start playing power games. The craving for wealth and the control of information then becomes rather out rightly just an ugly manifestation of underlying power games.

When asked what they seek from bosses, most employees admit it is not money or knowledge: it is usually emotional comfort, a sense of security. In other words, they seek power. Likewise, what do bosses seek from employees — respect, obedience, creativity, involvement. Both sides seek power. This is one transaction where each one has the infinite capacity to give, and take.

All over India, Durga is worshipped as mother, a term rarely associated with the goddesses of wealth and knowledge. She is Amman in the South, Ma in the East, Ai in the West, Mata in the North. In Tamil Nadu, in temples such as Kamakshi of Kanchi and Meenakshi of Madurai, she is depicted holding not weapons but sugarcanes and parrot. Sugarcanes and parrots are symbols associated with Kama, the god of love and desire. Why is the goddess of power holding the symbol associated with Kama? What is the relationship between the trident-bearing mother and the sugarcane-bearing mother? Are they the same? What has love got to do with power?

In love, we feel secure, unthreatened. In love, we don’t feel invalidated or insignificant.We feel we are allowed to be ourselves. We feel powerful. In other words, love happens when power games stop. Then there is intimacy. A willingness to accept and admit the truth. There is no need to be afraid. There is no desire to destroy anything. In love, the trident is lowered and the sugarcane is raised.

This is most evident in Paradise Cafe, a small restaurant next to the Central Bus Depot. The Caf has a workforce of seven — two cooks who prepare the tea, coffee and simple snacks, two cleaners, two waiters and one manager. The manager is in charge of purchase, cashiering and overall administration. The tasks are well known and the pay is minimal. But the work conditions were very different when Sandeep was the manager as compared to when Dinesh was the manager. In Sandeep’s time, everybody hated the job. It was a day filled with screaming, shouting, swear words. They were kicked awake in the morning and they were abused right until it was time to sleep. Life was hell. But with not many options in the neighborhood, all six employees clung to the job and carried out their duties, accepting that this was their lot in life. Then Sandeep had to move back to his village; his father was ill. The proprietor appointed Dinesh as the manager. At first Dinesh was met with hostility and suspicion. But then, things changed. Dinesh had a way with words. He cracked jokes, made everyone feel valued and important. He praised the cooks, the cleaners, the waiters. He admonished them when work did not happen, but never in a way that took away their dignity. Every evening after work, they sat together and chatted about their lives and dreams. Sometimes they even sang songs. The pay was still minimal, the tasks still the same, the work back breaking. Yet, it was a happy little organization. What changed? Lakshmi? No. Saraswati? No. Durga? Yes. Suddenly, the organization was filled with a sense of emotional security. People felt safe and loved and protected. Dinesh would take care of them. He held the sugarcane and the trident — with the sugarcane he attracted positive vibes; with the trident he kept away negative vibes. No one in his team felt invalidated, insignificant or vulnerable.

Organizations often forget that at the core of the human being is fear — fear of invalidation, fear of impermanence, fear of insignificance. It is this fear that propels us to be who we are. It influences our behavior. Makes us ambitious, clever, cunning, generous, stingy for wealth and knowledge and affection. Emotion, not wealth or knowledge is what makes and breaks relationships.