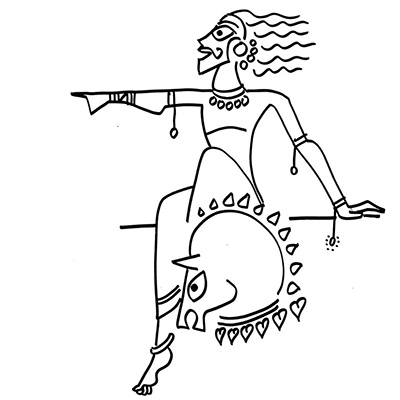 Can a woman be a muezzin and call the faithful to gather at the Jama Masjid to pray? Can India have a female archbishop? Can an openly gay man be allowed to lead the Akal Takht? Can a Dalit be a priest in a temple at Kanchipuram, Tamil Nadu? Can a European be allowed to enter the Jagannath temple in Puri, Odisha? Can members of the newly formed kinnara (transgender) and all-woman akharas lead the Shahi Snan at Kumbha mela? Can women enter the Sabarimala temple following customs until now restricted to male devotees? Yes. Yes. Yes. We can imagine so many ‘reforms’ in religion. However, notions of reform are often based on ‘assumptions of deformity’, which are dependent on ‘assumptions of normality’.

There are many who see religion itself as a deformity. Among the rest, there are those who subscribe to the popular assumption that a ‘normal’ God is one who considers all creatures as equal. This definition of God, however, is not universal; it is political, rooted in Abrahamic mythology that informs Judaism, Christianity and Islam, as well as notions of modernity.

The opposite is NOT a religion that believes in inequality (which remains that standard Euro-American view of Hinduism) but a religion that appreciates diversity, and the inherent hierarchies and dynamics within. This latter non-Abrahamic view informs Hinduism, Buddhism, Jainism, Confucianism, Taoism and many tribal and folk religions of the world.

Germaine Greer, the feminist icon, sadly reviled nowadays for her rather politically incorrect views on transgenders, said in an interview that she did not believe in equality feminism but in liberation feminism. For her equality feminism meant trying to be equal to a man while liberation feminism meant having the freedom to make choices. This framework that distinguishes ‘equality’ from ‘liberation’ is a useful one when appreciating faiths of the world. Dominant Euro-American belief systems, both religious and secular, seek equality. Dominant Indic belief systems seek liberation from inescapable natural and artificial hierarchies.

In the quest for liberation, the monastic traditions of India concluded that women are temptations who entrap you in the material world, which is why hermits leave their families to become enlightened beings (Buddha, Mahavira, Kardama, for example). Liberation is further enabled by a male body, which is why all the Buddhas and Bodhisattvas of Buddhism are male (the female Bodhisattva, Kwan Yin, emerged in China after China was ruled by its one and only female Emperor during the Tang dynasty), and why all the Tirthankaras of Jainism are male (the gender of the Tirthankara, Malli, is hotly contested by various Jain denominations), and why most Naths and Siddhas of Hinduism tend to be male. Why male body? Because men can voluntarily control the movement of their sexual fluid (semen) which gives them magical (spiritual?) powers. Women cannot control their menstrual flow, which makes them closer to nature, hence death, hence entrapment and even pollution. This mythic architecture governs Indic religions.

It is in this context that the ritual practices linked to the Sabarimala temple of Kerala need to be seen, which is visited by thousands of men dressed in black after nearly six weeks of practicing celibacy and continence. Women in the fertile age, in other words women who menstruate, are forbidden from entering the shrine and climbing those famous 18 sacred steps.

The deity atop the hill, Ayyappa, is the son of two gods, Shiva and Vishnu, and so is known as Hara-Hari-suta. Even though Vishnu took a female form, that of Mohini, he was not born the normal way via the womb (yoni), which is why he is called ayonija, a common mythic indicator of non-materiality. Adopted and raised by the king of Pandalam, the boy grows up to kill a female demon, Mahisi, sister of Mahisha, the male demon killed by the Goddess Durga. He declines the offer of marriage made by Nila, his guru’s daughter. He is sent to the forest to fetch tiger’s milk (a ploy to get him killed) by his stepmother, the queen, who fears for her own son’s inheritance. Thus we see a consistent tension between genders, with the female embodying negative energies (the rage of Mahisi, the desire of Nila, the envy of the queen). Must this be taken literally or symbolically? Is that why women, who can still menstruate, hence are still fertile, are forbidden from the shrine? We can argue against these ‘absurd’ mythic structures, and make them ‘more rational’ by embracing a non-patriarchal equality-subscribing God. This presupposes that the Sabarimala temple exists primarily to exclude women just as modern capitalists want to keep women out of the workplace to avoid losses due to maternity leave. The tendency to see all hierarchies as oppression is a 20th century phenomenon. In this rather combative worldview, everyone who is smart or rich, male or white, heterosexual or Brahmin, educated or married, beautiful or talented, is ‘evil’, and tradition itself is problematic, with science and rationality and of course, the Supreme Court, offering the ‘only’ acceptable solution.

Of course when male priests of Sabarimala temple speak of ‘scanners to detect menstruation’, it seems they are subscribing (cynically? authentically?) to the popular belief that menstruation provides negative vibration. This pseudo-science ‘vibration’ framework, mouthed by many gurus of India, continues to be used to keep Dalits out of temples too.

Ironically, the traditional method of creating peace was inclusion, not exclusion. The temple at Sabarimala was an attempt to bring together various faiths: tribal, folk, Shakta, Vaishnava, Shaiva, Vedanta, Tantra and even Islam. That is why the shrine complex includes a shrine to the Muslim Vavar (who is offered black pepper, once traded with Arab merchants), as well as the local Kaduthaswamy, to whom tobacco is offered. Mahishi herself, purified by death, is resurrected and worshipped as Malikapurathu Amman in a shrine whose doors are always shut. In this inclusion exercise, women in the fertile age were excluded to satisfy Brahmanical, even Buddhist and probably even Jain notions of purity. The pilgrim shout, ‘Swami Saranam Ayyappa’ that mirrors the Buddhist chant, ‘Buddham saranam gacchami’ is indicative of the monastic roots of this shrine. While it is academically encouraged to call Brahminism patriarchal, it is politically volatile to call Buddhism patriarchal. History, and tradition, are however not as neat as we would like it to be.

Sabarimala, like many Hindu temples, is a layered shrine, full of rich historical, anthropological and sociological information. When we visit these temples, physically or psychologically, we can choose to focus on what is wrong there or on what is right there. Those who see only the wrong in religion are today valorised as critics and reformers. Those who only see the good in religion are maligned as traditionalists and apologists. Both will always exist. Together, they make up the force and counterforce of culture.