A reminder on the border 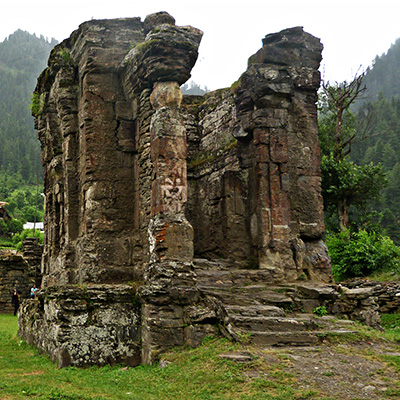 This is one temple we cannot visit. Actually, it is not a temple any more. It is a ruin. And it is located across the Line of Control (LOC) in Pakistan occupied Kashmir (POK), near the Kishenganga river, now renamed the allegedly more Islamic-sounding Neelam river. This is Sharada-peeth, said to be where the right hand of Sati’s corpse fell. It was once a temple of Saraswati, the goddess of knowledge, and renowned as a centre of learning. From here came the Sharada script, that was once very popular in north India, and which eventually gave rise to the Gurmukhi script of the Punjabis and the Sikhs. Today we simply have stonewalls without its characteristic pyramidal roof, in a quadrangle, a poor copy of the more magnificent (but also in ruins) Martanda temple located on the Indian side.

Though the site may be older, archaeologists are of the opinion that like the Martanda temple, the Sharada peetha may have been built 1300 years ago, and destroyed 500 years ago by Sikander Butshikhan who used brute force to establish Islam in Kashmir. Sikander means conqueror and Butshikhan means icon-breaker, making this the warlord’s title more than name. The Persian-Arabic word ‘but’ refers to Buddha as Muslim iconbreakers encountered more Buddhist images in Central Asia before encountering Hindu images in South Asia. It was partially restored by Maharaja Gulab Singh of Kashmir in the 19th century before Pashtun tribesmen overran the site in 1948, resulting in its disuse. An earthquake in 2005 further damaged the structure.

To avoid accusations of Islamophobia, and to deny Hindu supremacists any political fodder, academicians often downplay the breaking of Hindu temples by Muslim warlords. Many go to the extent of saying it is vastly exaggerated, or that the actions were political and not religious, therefore understandable, or downplay it by juxtaposing the violence of Hindu kings against temples of rival Hindu kings. This approach has resulted in historians losing the respect of the average Indian, who are increasingly swinging to the other extreme: blindly accepting polemic political narratives of nationalist writers.

The fact remains there was a temple of Saraswati in Kashmir and Kashmir does have a long Buddhist and Hindu history that was overrun by the arrival of Islam. While the Kashmiri youth are being encouraged to glamorize the ISIS version of Caliphate, and hate all things Indian, no one seems to be encouraging them to pay attention to, and even celebrate, their pre-Islamic legacy, else it will all be wiped out as it has been in most of Arabia. Celebrating Kashmir’s non-Islamic legacy must not be left to Kashmiri Pandits, who have been driven away from their homeland. Pakistani academicians and culture enthusiasts try to cling to their pre-Islamic heritage, but they do so with trepidation, for fear of being accused of blasphemy.

In the hymn to Sharada, she is always identified as Kashmiravasi, or resident of Kashmir. And for a long time, Kashmir was known as Sharda-desha, the land of the goddess of knowledge. Sharda-peetha was clearly a centre of learning. Legend has it that there was a university here, like in nearby Taxila, with four doors facing the four cardinal directions. The southern door was opened for Adi Shankaracharya 1200 years ago, and he was made to sit on the highly prestigious sarva-jnana-peetha, or seat of all wisdom, after he impressed resident scholars with his decoding of the Vedas. Was this true? We cannot be sure as there is no corroborative evidence. Much of Shankaracharya’s life is shrouded in mystery. And there are no ruins of a university around the Sharada peeth temple ruins like ruins found in Taxila, or Nalanda.

There are many legends associated with Adi Shankaracharya’s visit to Kashmir. One night, he suffered cold and hunger pangs, as his host gave him food, wood and water, but no fire. The next day, the lady of the house appeared before him, and simply sprinkled the water on the wood and set it ablaze, thus revealing to the great scholar that he did not know everything. Was this lady a manifestation of the goddess? Adi Shankaracharya surely thought so and it led him to compose poems in praise of the goddess such as Saudarya Lahiri, and Sharada Bhujana Stotram, where he refers to the earrings of the goddess, probably referring to the characteristic dejhoor earrings of Kashmiri women, an octagonal ‘yantra’ that dangles from the ear by a thread and rests on the shoulders, passed on from mother to daughter at the time of marriage.

In another tale, Adi Shankaracharya argued that the icon is mere representation and not the manifestation of the goddess, when suddenly the head of the icon started bleeding. Bleeding stopped when Adi Shankaracharya tore a piece of his garment and tied it around the icon’s head. This became the traditional taranga headscarf worn by Kashmiri women.

Before Adi Shankaracharya, this temple/university was visited by the famous Chinese Buddhist scholar Hyun Tsang about 1400 years ago. It was also probably associated with earlier Buddhist scholars such as Nagasena, who engaged with Milinda, and Kumarajiva whose father was Kashmiri and mother, Chinese. Al Beruni, the Arab historian who lived 1000 years ago, refers to the temple and its icon, as does Kalhana in his historical Rajtarangini, written 800 years ago. Ramanujacharya visited this temple before he wrote his commentary on Vedanta. The Jain scholar Hemacandra sought grammatical works archived in this temple to write his own treatise on grammar.

We don’t know what the image of Sharada looked like. One theory is that it was a wooden image, later replaced by a stone statue that looked like the Sharada image brought to Shringeri, Karnataka, by Adi Shankaracharya. In this image, the goddess has four arms where she holds a parrot (symbol of Parvati), a pot (symbol of Laskhmi), a book (symbol of Saraswati) and the gesture indicating transmission of knowledge in the fourth hand. The greatest knowledge we can hope to get from Sharada is perhaps the ability to appreciate the violence of the past without letting it upset the peace of the present, and the future.