A Purana for Muslims 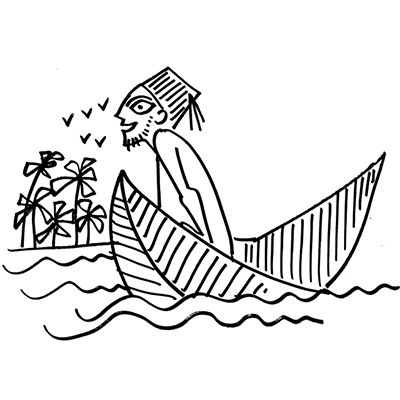 Many Muslims in Tamil Nadu call themselves Marakkayar, which means seamen, a word that is derived from the Arabic ‘markab’. They believe their ancestors were Arab sea merchants who took Tamil wives, or Tamil men who converted to Islam following contact with Arab merchants. They speak Tamil using loan words not only from Sanskrit but also from Arabic and Persian. Unlike Islam in the North that spread through warfare, Islam in South India spread via traders. The traders went as far as Malaysia and Indonesia, which is why these countries have a high Muslim population.

In all these places, local traditions thrived simultaneously. The local Muslims of Indonesia and Malaysia used Hindu and Buddhist cultural symbols in their social life. The close integration of local communities means that it is not uncommon to find an Amman shrine of the mother goddess in a Tamil village by whose side stands a Muslim warrior, usually on a horse, known as Muttal Ravuttan. Of course, much of this is changing in recent times because of a highly intolerant and puritanical Wahabi form of Islam emerging from Arabia.

Here we find Allah being referred to using the honorific ‘Thiru’ which is the Tamil equivalent of the Sanskrit ‘Shri’. The Quran is described a Veda. In fact, four Muslim Vedas are referred to: Torah given to Moses (Musa in Islamic mythology), Zabur given to David (Dawood), Injil (Gospel) given to Jesus, and Purukan (Quran) given to Muhammad. The ‘shahada’ or declaration of Islamic faith is called mula-mantra or the seed-hymn of Hindus.

The influence of Tamil Hindu literature is obvious, especially in the use of figures of speech. There is the traditional description of how clouds from the sea hover over mountains (of Arabia?) and burst into torrential rains, giving rise to a river full of sparkling gems and fragrant sandalwood whose water is collected in ponds to nourish all of life. The city of Mecca is described as how Tamil Poets would describe Mithila or Madurai: full of lakes where lotus flowers bloom. Mecca is even described as beautiful as the gem on the hood of Adi Sesha. The chapter describing the Prophet’s daughter Fatima’s wedding to Ali seems very similar to Tamil verses describing Sita’s wedding to Ram, with women in Medina overflowing on balconies to catch a glimpse of the handsome groom. The women are described from head to feet, their bodies adorned with hair and jewels, contrary to the image of women in veils.

Clearly this is metaphorical, not literal; a comfort with the Tamil language and metaphor to express one’s religious sentiments without feeling self-conscious or fearful of fragile fundamentalists. The text belongs to simpler times, when Hindus and Muslims exchanged ideas and no one had a problem when a Muslim poet used traditional Hindu and Tamil metaphors to describe his God and his Prophet. This maturity and large-heartedness is at the core of the Indianness that many fear is now under threat, from inside and outside. If this topic interests you, do read about it in the writings of Vasudha Narayanan who is Distinguished Professor, Department of Religion, University of Florida.