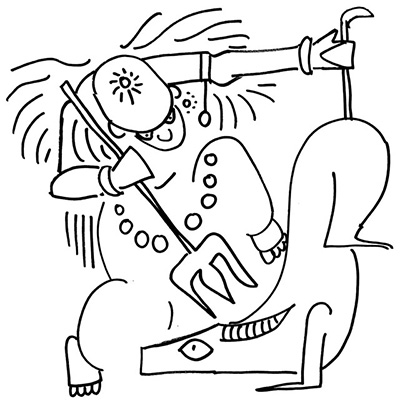 The story of Durga comes to us from the Sanskrit Devi Mahatmaya or Chandi Patha that is part of the Markandeya Purana and is around 1,500 years old. Her icons are also traced to the same period. Some scholars are of the opinion that the idea of a lion-riding goddess probably came with the Kushana kings as the Goddess Nanna, a variant of the Mesopotamian Ishtar, or the Persian Anahita. Others believe she is indigenous, part of an older, earlier matriarchal pre-Vedic substratum, as suggested by Indus valley tiger-woman seals. Broadly, we find three schools of interpretive narratives: the dominant mainstream (patriarchal?) narrative, feminist narrative and the subaltern narrative. Every theory is just speculation to suit various political ends based on shadowy and sparse facts.

In the dominant narrative, Durga is constituted by the power or shakti of various male gods. She kills a demon who the gods cannot kill as he cannot be killed by a man, thanks to a boon. Here, her womanhood is thus, the source of her power. The demon wants to marry her, but she rebuffs his advance and ends up killing him. She is described as drinking his blood, though increasingly worshippers of the goddess prefer to visualise her as vegetarian and follow vegetarianism at least during her festivals. The traditional association of blood sacrifice is rapidly waning, especially in privileged communities who prefer the moral high ground offered by ahimsa. The narrative also describes Durga as the demure wife of Shiva who, only when needed, and with the permission of her husband, can turn into her warrior self.

The feminist narrative sees the buffalo-demon as the symbol of the male ego, the patriarch, who is overpowered by the female power. This makes Durga a symbol of women’s liberation movement, though Kali is even more preferred as Kali is visualised as naked and wild, untamed by the male gaze, while Durga seems more domesticated, with her bridal finery. In many folk narratives, the village-goddess kills her own husband who has cheated her or betrayed her. And so, the violence is associated with a kind of sexual tension and betrayal of the feminine. This visualisation of the demon as husband as well as antagonist is downplayed in patriarchal versions of the story, though the Skanda Purana and the Arunchala Shthala Purana do speak of Durga finding the Shiva-linga in the throat of Mahisasura after she beheads him. She performs penance to cleanse her of the ‘sin’ of killing a devotee of Shiva, or, some say, a form of Shiva. In Tamil Nadu, there is a temple associated with both, the spot of her ritual cleansing and the site where the Shiva-linga is worshipped.

Then comes the subaltern narrative where Mahisasura is a leader of dark-skinned races, much like Ravana and Bali, who is defeated by the fair-skinned Durga, just as the other leaders were defeated by Ram and Vaman, seen as fair, upper caste and North Indian. It ignores the historical theory that Durga was probably originally a tribal or Savara goddess from the Vindhya region who was included later into the Brahminical fold as Vishnu’s sister and Shiva’s wife, or the symbolic theory that sacrifice of husband/devotee/antagonist embodies the tension between humans and nature, for humans (embodied as male) domesticates nature (visualised as the free female or ‘w***e’) to create culture (visualised as the wife). This narrative has prompted the Mahishasura Martyrdom Day that voices the rage of communities that have been marginalised, only to rile up extremist Hindus who cannot handle pluralism.