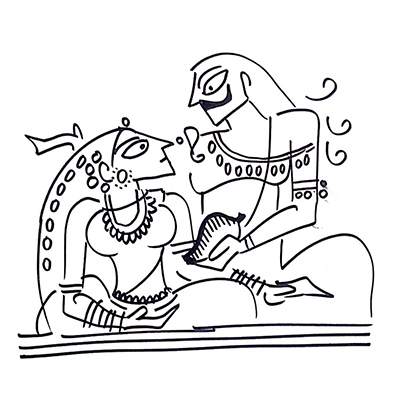 Once upon a time there was a king who loved his wife very much. One day, a traveller gave the king a rare type of mango. This he gave to his wife at night. The following day, he found this mango atop of pile of horse dung being carried in a basket by the woman who cleaned the royal horse stables. The king asked her who gave it to her. She replied, the keeper of royal horses who loved her very much gave it to her. And she wanted to give it to the man she truly loved, her husband. The king approached the keeper of the royal horses and asked her who gave him the mango. And he said, every night he is visited by a nymph who gives him gifts. The king hid in the horse stable that night to find this ‘nymph’. And sure enough, the nymph turned out to be his wife. The king was heartbroken. He realized that while he loved his wife, she loved someone else, who loved someone else, who in turn loved someone else. The king lost all interest in the possibility of love that is genuinely reciprocated. And so he renounced his wife and his kingdom and became a hermit.

This king was called Bhartrihari. He gave his crown to his younger brother, the legendary Vikramaditya. The story of Bhartrihari was very popular in medieval times when society was torn between the sensual traditions of Tantra and the devadasis and the monastic traditions of Vedanta and the acharyas. He is said to be a Nath or master of the Nath-Sampradaya which worshipped the formless god and believed in powers or siddhi that comes to men who following the monastic path and stay celibate. His sister’s son was Gopichand who was doomed to die at an early age and could only be saved if he became a monk. All these stories seem to suggest disillusionment with all things worldly — love, pleasure, relationships.

When I look at the political parties seeking to lead our country, I see a lot of celibate men, bachelor men, men who cling to Gandhian values, all seeking to be upright and pure. No sign of shringara amongst them, no love, no erotic appeal, no association with arts or creativity, a general disdain for the colourful. Have their hearts been broken as Bhartrihari’s? Can such a heart, devoid of love and fun, ever be a good ruler? Or will such hearts express through their policies and judgments bitterness, and an astringent disdain for those who want to enjoy life, broken hearts withstanding? Let us wait and see.