A mythology checklist: Are you Left or Right? 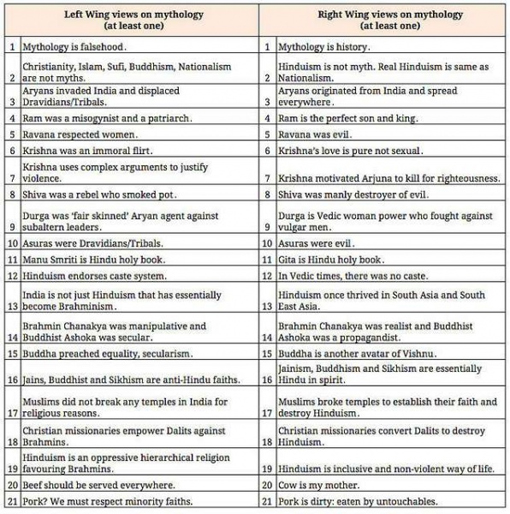 An editor once asked me on what basis I used terms like Left and Right in my tweets and columns. For me, Left and Right are codes for two forms of extremism. Both display moral certitude. Neither can handle diversity, hence seeks division, and elimination of the other. Both bring value, but only when used in moderation. I use a simple mythological checklist to identify the leanings of people because everyone has certain assumptions about mythology. Below is a simplified version of that checklist.

Note: These boxes are not sealed, and there is much space between the two of them. People often jump from one to the other, depending on context and even audience. Those who don’t jump between boxes see themselves as purists. They accuse the rest of being fence sitters and opportunists. They refuse to see their stand as stubborn and stagnant. It is what stops them from listening, or growing.