A Jain Take On Lakshman’s Death 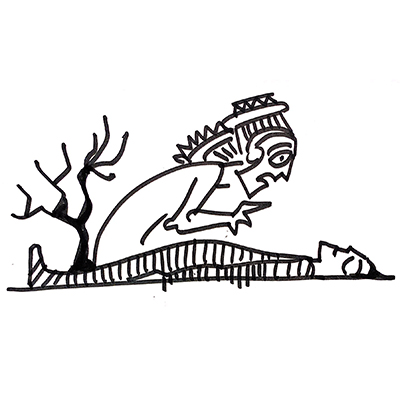 In the Jain Ramayana, Ram is considered to be a baladev. He is non-violent. Lakshman, on the other hand, is considered a vasudev. It is Lakshman who kills Ravan using a magic wheel, while Ram maintains the Jain ideal of non-violence.

Many years later, Lakshman dies. When he dies, Ram is unable to accept his death. He carries Lakshman’s corpse in his arms and wanders in his palace. Very much like Shiva, wandering the earth, after Sati’s death, holding her charred remains. The Jain manuscripts, such as the Padma Purana, describe how Ram tries to bathe Lakshman’s corpse. He tries to clothe him, feed him and entertain him with music to wake him. He refuses to accept his death.

Weeks pass with Ram clinging to Lakshman’s dead body. It alarms both ministers and citizens who don’t know what to do. News of Ram’s sorrow reaches Lanka where Indrajit’s son hears of his madness. He decides to take advantage of this moment to attack Ayodhya. He leads a great army from the southern kingdom of Lanka to the northern kingdom of Ayodhya. He does so to defeat Ram who had killed both his grandfather, Ravan and father, Indrajit.

Luckily for Ram, their path is blocked by two celestial beings. These beings in their former lives had been Jatayu and a vanar commander in Sugriv’s army. They use their magical powers to delude the attacking rakshasha army by creating mountains in front, behind and above them. This stopped them from walking forward, backwards and upwards. This trapped them until they lost all will to fight. They decided to return to Lanka via a narrow passage created by these gods. But, they changed their minds about returning to Lanka, after being defeated and humiliated. They believed they would be mocked by all. Instead, they chose to become Jain ascetics.

Then, the two celestial beings decided to help Ram cope with his grief by performing certain deeds. They watered a dried tree; they tried to plough a field with dead oxen. They tried to churn butter out of a pot of water. They tried to obtain oil by crushing sand in an oil crusher. By doing such useless activities, they attract Ram’s attention. Ram wondered how they plan to revive a dead tree by watering it or plough a field by using dead oxen. How will they get butter by churning water and oil by crushing sand?

It is then they told him, “If you believe Lakshman will come back to life by carrying his body, surely what we wish to do can be achieved.” Hearing these words, Ram realised his foolishness, accepted Lakshman’s death and cremated him. The divine creatures revealed who they are and how they came to help Ram by releasing him from his delusions. They returned to heaven. Ram dealt with his grief and decided to rule the kingdom for a few more years, before he, too, was ready to become a Jain ascetic. After that, he gave the kingdom away to Shatrughana.

This tale comes from Ravisena’s Padma Purana. It is a 1,200 -year-old manuscript.