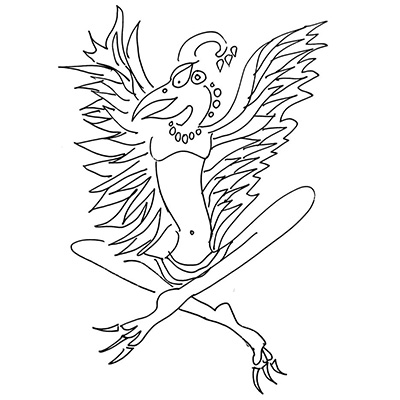 Many Jain scholars have retold the Ramayana epic. Here, Ram is addressed as Padma and is considered a Baladeva, one of the 63 types of great men who live in a single human era. Vimalasuri wrote the Paumachariya in Maharashtri Prakrit language about 1,900 years ago; Ravisena wrote the Padmapurana in Sanskrit about 1,300 years ago; Swayambhudeva wrote the Paumacariu in Apabrahmsa about 1,000 years ago. What is interesting in these Jain retellings is that the characters often encounter Jain ascetics who enlighten them about the Jain way of life. Often, there are tales on the past lives of many key characters. And, many a time, the characters eventually adopt the Jain way of life.

Jatayu, the vulture, is a case in point. Swayambhudeva informs us that Jatayu faints on encountering Jain monks, for he recollects his past life. In an earlier existence, he was a king called Dandaka who practised Buddhism. He once encountered a Jain monk in his royal garden and tried to shoo the sage away by throwing a dead snake at him. But the sage who was meditating, continued unperturbed, impressing Dandaka. He swore to take care of the sage, but his family members poisoned his mind and he turned against Jain ascetics, as a result of which he was cursed to be reborn as a vulture in a future life. The Jain monks then explained to Jatayu the Jain way so that he could liberate himself from a vulture’s life in a future existence.

In these Jain Ramayanas, Dasharatha wants to become a Jain monk, as does Bharata. To force Bharata to live as a householder, Ram goes to the forest and Bharata is obliged to take care of the kingdom. But eventually, Bharata becomes a Jain monk, as do the sons of Ravana after Ravana’s death and Sita after Ram banishes her to the forest. Eventually, Sita’s two sons – Lavana and Ankusha – in these retellings become Jain monks, as do Vibhishana, Hanuman and Sugriva. Ram listens to Jain teachings when he is unhappy. Once, after Sita is abducted, and then again after Lakshman dies. He is told how nothing is permanent, and how attachment to the flesh is meaningless. Eventually, before his death, Ram attains the highest wisdom known as kaivalya.

Often, the Jain teachings have no impact on the one who is listening. Ram, for example, continues to mourn the abduction of Sita, despite the discourse of the Jain monks. Ravana is described as a devotee of Munisuvrat, the 20th Tirthankara. After listening to Jain monks, Ravana decides not to force himself on Sita. After listening to Jain teachings through his wife Mandodari and Hanuman, Ravana feels he should let Sita go back to her husband, but decides to do this after winning the war. Unfortunately, it is Ravana who is killed in the war, by Lakshmana in the Jain versions, as Ram follows the principle of non-violence. Eventually, we are told, in a future life, Ravana will become a Tirthankara. At that time, Sita will be the leader of his followers, the Ganadhara.

This article is also listed under Jain, Ramayana