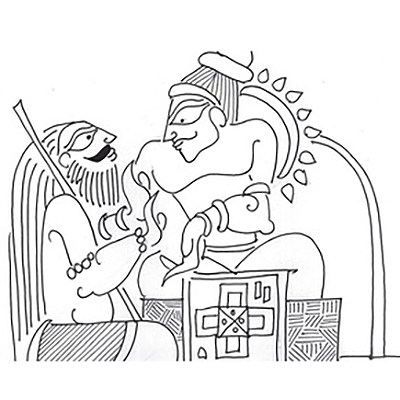 Published on 9th February, 2018, in The Economic Times.

In the beginning, in the first age of man known as Krita yuga, all was well. People respected property and women. But as the wheel of time turned and Krita yuga came to an end, people encroached on property and violated women. Lying and theft became common. So people went to Brahma who composed a complex treatise on dharma (order), artha (economics) and kama (pleasure), which was abridged and edited by Shiva, and later by Brihaspati and Shukra, the gurus of the devas and the asuras.

But these treatises were not good enough; so Vishnu was approached and he gave birth to Viraja from his mind. Viraja was told to be ruler of the world. He refused. He produced a son and his son produced a son. But they were not interested in kingship either. Finally Ananga was born, who turned out to be good king. But his son Atibala was not so good, and preferred to indulge his senses more than govern the world. Atibala’s son, Vena, was even worse, self-absorbed, licentious, greedy and nasty. The sages killed him with blades of sacred grass. They then churned Vena’s corpse.

From the right thigh rose a nishadha (tribal) who was driven into the forest. Finally from the right hand rose a good man: Vishnu entered him, sages instructed him, the devas gave him a bow and consecrated him as king. He then chased the earth-cow, who had run away, terrorised by the behaviour of bad kings and even worse subjects, and promised the earth he would care for her as a cowherd cares for a cow. He would institute laws in accordance with dharma, and ensure she is milked properly, not exploited or hurt.

This story is narrated by Bhisma to the Pandavas in the Shanti Parva of the epic Mahabharata. But he proceeds to tell them another story about the origin of kings. He states that when things went bad, people came together and made agreements amongst them to get rid of the troublemakers who did not respect property or women. However, implementing these agreements became difficult so they approached Brahma to appoint a leader amongst them, a king. Brahma chose Manu, but Manu hesitated to be king as he knew to be king meant being cruel and being unloved, and being prone to corruption. The people urged Manu not to be afraid.

They said that he would not earn demerits due to his harsh actions. Soldiers would follow him. He would receive merits of his subjects. And he would receive a portion of the people’s wealth: their cattle, their gold and their grain. Manu accepted this arrangement and became the first king. From him arose the solar and the lunar dynasty of kings. The Buddha, however, told a different story about the origin of kings. He agreed that kingship was created in response to social disorder. People lamented the situation and finally went about looking for the most handsome, most charismatic, and most authoritative of men and gave him the power to criticise whoever needed to be criticised, and punish whoever needed to be punished, and banish whoever needed to be banished.

In exchange, they would give him a portion of rice. This man was called Mahasammata (the great elect), and raja (who brings happiness to people). But what makes a king a great king is when he rules as per the dhamma (Buddhist way). It transforms the cakkavati (world ruler) into dhammiko dhammaraja (righteous and moral king). In Buddhism, kingship is a manmade institution, but its effectiveness depends on how aligned the king is to the Buddhist ideal of detachment. We learn of Mahasudassana, a great king who ruled well because he lived not to acquire power, but to gradually outgrow his desires and his possessions. In another story, a kingdom descends into poverty and insecurity when the king stops following Buddha’s dhamma and rules by his own ideas.

These scriptures are clear that a leader is appointed by the people, from the people, and for the people. He is even paid for this services. However, his success depends on whether he is aligned to wisdom, what Hindus would call atma-gyan and Buddhists would call dhamma, where he seeks not to indulge his desires, but to outgrow his desires, while creating an ecosystem where his subjects can thrive. In other words, the inner world of the king has a dramatic impact on the outer world of the kingdom. We realise the wisdom of these ideas when we observe the insecurities of present day politicians whose anxiety for their power, rather than for the pleasure of the people, shapes the economic policies of the land.