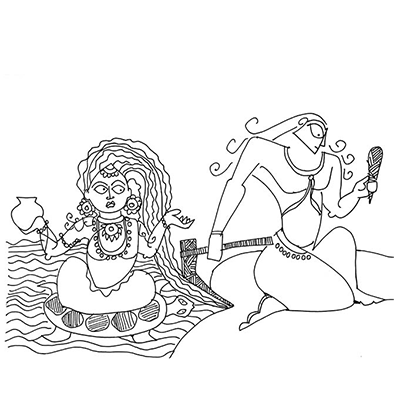 Traditionally, temples across India have two images on either side of the entrance: Ganga and Yamuna. The two river-goddesses transform the temple into a ‘tirtha’ or ford, a holy place that connects the human world to the divine world.

Like the dolphin, Ganga is visualised as bubbly, fast and cheerful and, like the turtle, Yamuna is visualised as shy, sluggish and forlorn. Ganga is considered the wife of Shiva, seated on his head, restrained by his hair while he sits still while Yamuna is considered the wife of Vishnu, following him, trying hard to keep up with him as he keeps wandering away to save the world. Thus, the restless Ganga complements the still Shiva and the still Yamuna complements the restless Vishnu. Complementary forces are a key theme in Hindu mythology.

The overarching mood related to Yamuna is tragic. In the Vedas, she is Yami, holder of the promise of life, who watches her brother Yama die rather than accept her proposal, and thus become the god of the dead, never able to come back to life. She is Yamini, the night, who can never enjoy the sun. In the Puranas, she is the dark river, Kalindi, the opposite of the foamy white Ganga, both daughters of Himavan, the mountain-god. She watches Krishna dance the raas-lila from afar, worshipping him, adoring him, and even following him to Dwarka when he leaves the village of cowherds.

Then, there is the violent story of her domestication. Krishna’s brother Balarama, who was paying a visit to the area known as Vraja long after Krishna had moved to Dwarka, felt like bathing in the river. But he was too drunk and too tired to walk to the river. He ordered Yamuna to come to him. She refused. Enraged, Balarama raised his plough and dragged the river-goddess towards him.

Khushwant Singh, in his book, Delhi, narrates the folk version according to which Balarama dragged Yamuna by the hair and had his way with her. Her struggles gave rise to the many bends of the river around Delhi.

The story, according to some anthropologists, is suggestive of canal irrigation by the Surasena tribe. Balarama with his plough was their god of agriculture, while Krishna with his cows was their god of animal husbandry; together they were the gods of the primary economic activities of a civilisation that according to archaeologists thrived as early as 600 BC.

Today, the river is horribly polluted, thanks to unchecked industrialisation on its banks. And there is controversy of how her banks are being utilised to create industrial zones, special economic zones, and for cultural festivals, that ignore the plight of farmers. Of course, the capitalists will reject all claims of environmentalists, and the communists will reject all claims of capitalists. Thus there is tug-of-war. Who do we believe? Fabulously wealthy gurus adored by millions of followers for their smart solutions to life’s problems, or activists who seem to be relentlessly anti-development and anti-government (or is it pro-environment)? A government that is as suspicious of NGOs as it is non-critical of saffron-robed celibate men? While we argue and debate, poor dirty neglected Yamuna flows forlornly, abused by man, perhaps even abandoned by Krishna.