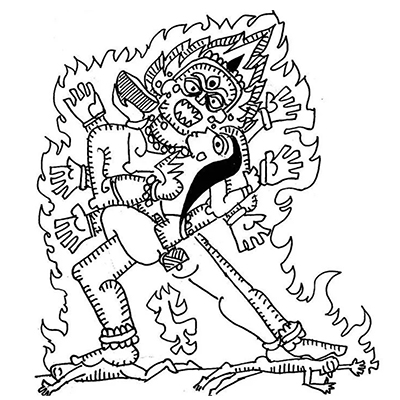 About 2,500 years ago, Buddha revolutionised the intellectual world with his idea that desire is the cause of suffering. He invented practices that would end desire and so suffering. He established a community of monks to carry forward his message. But as the centuries passed, the monks built on his ideas. This gave rise to many schools of thought. One such school of thought that emerged 500 years later, known as Mahayana (the greater vehicle), gave rise to a Sanskrit text known as Gandavyuha Sutra, which means the Excellent Manifestation Sutra.

Legend has it that the Sanskrit text was sent by the king of Odisha to China. There, it was translated and now exists in Chinese form. What is remarkable about this text is that it uses pilgrimage as the method of achieving enlightenment, where you travel and meet many teachers, who are called “Kalyana Mitra” or friends who enable spiritual fulfilment. This is amongst the first books, where the idea of the guru, as we know it today, is established. Here, a student is expected to completely surrender to the guru, and not to use his own powers of discrimination.

The text tells the story of a young merchant son called Sudhana, who meets 52 teachers. Nearly half of these teachers are women, a radical idea for its time. These women belong to different categories. Some are nuns, some are goddesses, some are queens, there is even a courtesan. Others include some kings, some monks. He also meets non-Buddhists, like a Brahmin and a rishi with matted hair. Every one of them gives him different visions that enable his spiritual growth.

The Buddhism of this text has a wider vision with multiple Buddhas occupying multiple Buddha realms, surrounded by lotus flowers, bountiful wealth and adoring students. Here is the idea that practice of dhamma creates good karma. This, in turn, generates wealth, which is why the Buddha is always surrounded with gold and gems. Another idea that is reinforced is that the purpose of wisdom is to do good for all living beings. This book is clearly directed at wealthy patrons, including women, who supported the Buddhist monasteries. Some people have called it a proto-tantric text, as it refers to ritual mandalas, sexual practices and complete devotion to teachers.

In this text, greater value is given to the Bodhisattvas who help human beings such as Maitreya, Manjushri and Samantabhadra. Buddhists are advised to pray to them and seek their help. Such beliefs have given rise to chanting practices popular in society today. Fulfilment of desires is not seen as incompatible with Buddha’s message.