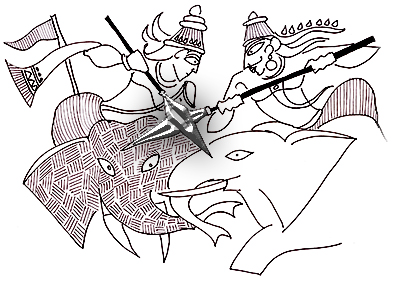 I started a company with my friend that became a success. Now we are having problems defining responsibilities and also dividing the fruits of success. Is there any episode or philosophy from mythology that can help us come up with an equitable framework of partnership?

There were once two asura brothers who were inseparable, and so invincible. Threatened by their rising power, Indra, king of devas, sent the apsara, Tilotamma, to seduce, and destroy them. One look at Tilotamma and both brothers wanted to marry her. “I will marry the strongest of the two?” she said coyly. And so the two brothers fought, to prove the other was weaker. And since both were equally strong, they ended up killing each other, much to the satisfaction of Tilotamma and Indra.

This is the story that Narad told the Pandav brothers to draw attention to the perils of having a common wife. Based on this, the Pandav brothers decided that each one of them would be husband to Draupadi for a year exclusively, in turns. If one brother entered her quarters in the time she was supposed to be with another, the brother would go into voluntarily exile for the transgression for twelve years. Thus the conjugal rules were set.

The brothers thought this was fair. No one of course bothered to consult Draupadi, if she agreed with this sequential agreement. Arjun was her beloved, but Bhima was the most enthusiastic husband and Nakul was the most handsome. If it was left to her, who would be she favor the most? Would she be fair? Would she prefer one over the other? Would the five brothers stay united if her affections were unequal?

So the question before you is: who is the beneficiary of this equitable framework of partnership? You, your partner, your organization or your customer? Someone is bound to be unhappy. Someone has to be mature enough to allow the other to get away with excesses. Basically, it is a matter of trust. Do you trust that you are looking out for each other or do you fear the one will exploit the other? If there is no trust, then there can never be equitable distribution of either investment or return.

In business it is extremely difficult to quantify both effort as well as fruit of labor. Who decides what is fair? Fairness is subjective, not objective. Different people have different frameworks and different measuring scales. You have to see if the arrangement fulfills the other and makes the other feel happy too; hopefully your partner is looking out for you too. If you are not, then you are no different from Sunda and Upasunda, doomed to fight and kill each other.