A cannibal of the Puranas 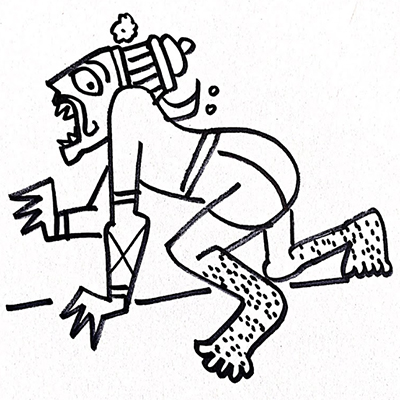 The Rigveda refers to the battle of 10 kings that was won by Sudas of the Bharata clan. In Puranas, we are told that he had a son called Kalmashpada. That is why Kalmashpada is also called Saudas, which means ‘son of Sudas’. Saudas Kalmashpada is infamous for being a cannibal.

In the Mahabharata, King Saudas was walking in the forest, on a narrow path, when he encountered Saktri, the eldest son Vashishta. Saktri refused to step aside to make way for the king and the king was too proud to make way from the Brahmin. This resulted in a confrontation between the two and the king abused the sage. At this, the sage got angry and cursed Saudas that he would become a man-eating Rakshasa. Ironically, once Saudas became the rakshasa, he ended up eating Saktri himself. He further went on to kill all of Vashishta’s sons. He suffered for a long time until Vashishta himself forgave him and wiped out the curse.

In the Vishnu Purana, the story is rather different. We are told that the king had killed a tiger, who was actually a shape-shifting rakshasa. The rakshasa’s aggrieved brother then decided to avenge his brother’s death. He entered the king’s kitchen and cooked human flesh that Saudas served his guest, who happened to be the sage, Vashishta. When Vashishta realised he was eating human flesh, he cursed Saudas to turn into a cannibal. Saudas did not understand how he could be cursed for no fault of his own. Angry, he took up some water, in his palm and chanted a magic formula, with the intention of hurting Vashishta. His wife Madayanti begged him to stop, saying that it was not right to curse someone who was a guest, who in turn, had anyway been inadvertently insulted, under mysterious circumstances. So, Saudas asked her what he should do with the potent water. If he cast it on the ground it would wither up the grain, if he cast it in the air it would corrupt the clouds and bar the rain. She advised Saudasa cast it on his feet, which caused it to be covered with boils and sores that made his feet blue and black, which is how he became Kamlashpada, the one with diseased feet.

In yet another story, Saudas ate a man, who was about to have sex with his wife. The wife, therefore, cursed Saudas that he would not be able to have conjugal relations with his wife, Madayanti. Madayanti then went to the sage Vashishta in order to conceive a child. The child, however, remained in her womb for seven years and had to be removed by using a sharp flintstone to cut open the womb (the world’s first caesarean operation?). This child came to be known as Asmaka, which means born using a stone.

The stories perhaps suggest violent confrontation between Vedic sages and tribal kings as the latter slowly assimilated into the Hindu fold through change in food habits and sex practices. This is speculation of course if one sees these mythologies as proto-history.