A Bypass in Business 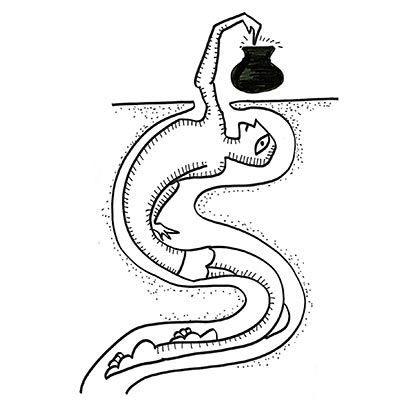 So a businessman goes to an astrologer. The astrologer tells him of a tragedy that is about to unfold, or a malevolent influence that blocks his progress. He hears all patiently and then asks, ‘Any upaay?’ He wants a way out, to outwit the stars, the planets, the astrological forces. For he knows there is always a way out. He does not accept his fate; he wants to twist his fate. He wants a bypass, a way around. So much for Indians being fatalistic!

We find in this stories. An asura invokes Brahma and asks for immortality. He is told that immortality cannot be given to anyone. So the asura asks for a boon that makes him invincible and near-immortal. He becomes all powerful. No one can defeat him, until a god comes along and finds a chink in the armor, a weak spot, an upaay, a bypass that enables him to cross the unsurmountable.

We are conditioned to think laterally. We are conditioned to think in terms of bypass, when the highway is not available, even if the highway is available but we feel there is a possibility of a shorter cut, a quicker way of reaching the destination. This is why, across Indian railways, despite foot over bridges, people cross the tracks taking risks with their lives, ignoring all warnings, negotiating with security staff who stop them.

It is to this mindset that we can trace the jugaad.

Jugaad is the Indian way. We want to glamorize and valorize. But it also evokes disdain, a way of shortchanging the system. It is all about the fixer, the one who meanders through the gaps in the system to get things done, the trickster who does not care for the system.

What is jugaad? It is contextual non-replicable improvisations. Contextual, as they are solutions that are created at the spur of the moment using resources at the moment. Non-replicable, as unlike innovations, they are not meant to serve as the solution always in every similar context. Improvisation, as they are tiny alternations not major dramatic transformations.

The word jugaad has many meanings. Its usage in the corporate word has the flavor a upper class fixer. But in Odisha, a ‘jogadu’ means a resourceful person, ‘one who can get things against all odds’.2020 And in the slums of Delhi, ‘aaj ka jugaad karna’ means ‘surviving yet another day despite odds’. The root has been traced to ‘jog’, which is the colloquial way to pronounce ‘yoga’. It means creating alignment between disjointed elements. He who brings together disconnected forces to solve a problem is the jogi or jugadu. In modern imagery, a yogi is a sublime ascetic but in folk imagination a jogi is a magician, a sorcerer, who can bring rains in drought, give children to the childless, by invoking forces of nature that are otherwise intransigent. In other words, he finds the upaay when there are none.

India has been a culture of abundance and scarcity. It all depends on the rain. When rains are good life is good. But in drought one has to do ‘jugaad’ to survive. Jugaad thus is an outcome of scarcity, where you can use their intelligence to get things otherwise reserved for the rich and the powerful. It allows you to break the queue. If you follow the queue, there is a strong chance you will be left out. Any ‘system’ in a poor country end up creating unfairness as there is not enough resources to go around and invariably the rich and powerful benefit.

Further, jugaad thrives in India as we don’t trust systems. Unlike the USA, where there is always a 911 to call in emergencies, Indians don’t have a national 911 equivalent known to every man, woman or child. Each one has to fend for themselves. You work with whatever you have. And the one thing you can always rely upon is your wit. Your buddhi. That which gives Siddhartha Gautama an upaay out of the world of sorrow and makes him the Buddha, is the very same thing that gives the jugadu an upaay out of a crisis.

It has gone to a point where, even when systems are working, and there is no scarcity, we still rely on the jugaad, and seek upaay even in fortune and abudance. For there is valour and glamor in jugaad. For the jugadu, everyone else is buddhu, a witless fool.