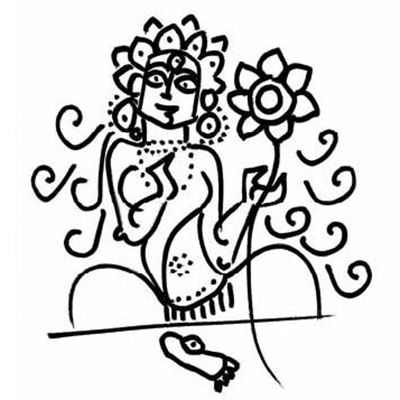 A thousand years after the Buddha’s nirvana, Buddhists finally acquired a goddess of (almost) equal stature to the Buddha. Before this, the only goddess who was very prominent in Buddhist literature was Shri or the Goddess of fortune, clearly included within the Buddhist iconography by the lay people.

However, a 1,000 years later, the need for a woman to be part of the Buddhist pantheon was felt greatly, and so emerged Tara.

Tara’s entry into the Buddhist pantheon was a very slow process. It began in many ways, with the rise in Mahayana Buddhism, about 500 years after the Buddha passed away. In this new school, people asked about the compassion of the Buddha, beyond his wisdom, and these conversations on compassion lead to the creation of a character known as Bodhisattva, someone who delays his nirvana, so that he could help people from their suffering. As these ideas emerged, the idea of compassion and wisdom came about, Buddha came to be associated with compassion and wisdom was given a female form, Tara.

The earliest iconography of Tara as an independent Goddess comes to us from the Ellora caves, in the western part of India, roughly around 7th century, so 1,300 years ago. She is visualised holding a lotus flower, like Shri, for whom lotus embodies fortune, and like Padmapani, the compassionate lotus-holding Buddha, for whom lotus embodies wisdom.

Tara is seen sometimes as one and sometimes as two and sometimes as four and sometimes as a collective of 21 Goddesses. The most popular forms are the white Tara and the green Tara. The two are identified with the Chinese and the Nepalese wives of the Tibetan king, who introduced Buddhism into Tibet. The green Tara is associated with seven eyes, a third eye between the forehead and extra eyes in her palms and soles of her feet that enables her to hear people. The two are visualised as standing on his left and right sides, holding an un-bloomed and a bloomed lotus, for Bodhisattva listens to the cries of suffering people, day and night.

Tara is an important part of Buddhism but it is not part of the oldest school, Theravada Buddhism, practiced in south-east Asia, in Sri Lanka and Myanmar, where a greater importance is given to the historical Buddha.