A brief history of Vedic thought 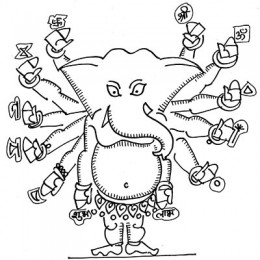 Vedic thought placed great value on expanding in the mind (brah-mana) to appreciate infinity (an-anta) and so established a rather expansive framework that enabled Indians to accommodate ideas that came in with Indo-Greeks soldiers, Chinese pilgrims, Arab traders, Central Asia warlords including the Mughals, and of course, the Europeans colonial powers.

When we try and study Vedic thought, we realize that we have to do a kind of mental archaeology, digging through layers of literature and ideas. Dating of ancient Indian literature is always difficult and invariably approximate.

The oldest portion of the Vedas, Rig Samhita, involved only chanting mantras. The earliest hymns of the Rig Veda can be even dated to 6000 BCE (Before Common Era, formerly known as BC or Before Christ) because verses refer to autumn equinox in Orion constellation, long before the rise of cities of the Indus and Saraswati valleys. The bulk of the hymns emerged after 2000 BCE. They refer to the river Saraswati, that flowed parallel to the Indus, that we now know dried up around in this time, and indicates a migration to the Gangetic plains.

The fourth portion of the Vedas, Aranyakas, involved private contemplation on mantras by isolating oneself alone in the forest (aranya) with the aim of extracting its secrets.

The fifth portion of the Vedas, Upanishads, emerged from discussions on the nature of reality as revealed by the Vedas. This later came to be known as Vedanta, or final phase of Vedic thought. This began around 1000 BCE.

The sixth portion of the Vedas, Puranas, came into being after the rise of monastic orders like Buddhism and Jainism in 500 BCE. They were stories aimed at communicating Vedic ideas, made even more accessible by connecting them to pilgrim spots across the subcontinent of India. The Puranic literature includes Ramayana and Mahabharata. They introduce us to the forms of God we are familiar with today such as Brahma, Vishnu, Shiva and the Goddess. With this literature, the focus gradually shifted from ritual (karma) and speculation (gyan) to devotion (bhakti).

The seventh portion of the Vedas, Tantras and Agamas, codified temple rituals that acknowledged and incorporated the characters of the Puranas. They started being put down in writing from around 500 CE.

The eighth portion of the Vedas, bhakti kavya or devotional literature, came into being after 1000 CE, and brought Vedic ideas to the common man in common tongue. In this phase, ideas that were restricted to Brahmins burst forth and reached the masses through the poetry of saints. It saw the rise of regional literature as well as regional scripts.

When the British came to India, they translated the Vedas for the first time. The hymns of the Rig Samhita were finally available in English to all. It forced Hinduism to reframe and reimagine itself. The reactions ranged from the defensive to the apologetic to the hostile, for more often than not the commentary had to fit into the monotheistic European template. Today, this is changing. Thanks to rise of postmodern studies, people are seeking alternate frameworks to explain the Veda that does not depend on Western framework or validation.