A Brief History of the Lion-Kings of Andhra 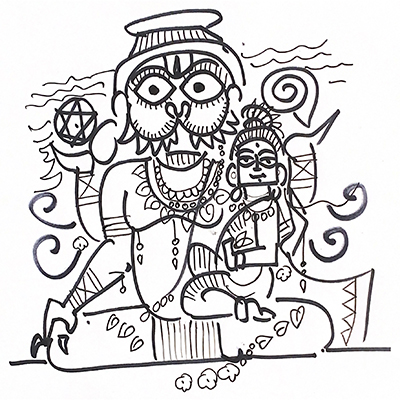 Everyone knows about the famous Venktateshwara Balaji temple of Tirupati located in Andhra Pradesh. What is less known are the Narasimha temples found in coastal Andhra, flanking the rice-rich deltas of Krishna and Godavari. These temples became popular as the old Vedic form of Hinduism gave way to the Puranic form of Hinduism about 1500 years ago. Kings needed to be linked to visibly powerful deities. The idea of a man-lion emerging from a royal pillar to destroy a tyrant and replace him with a devotee appealed to many chieftains. In these coastal temples, the enshrined Narasimha is not angry (ugra) anymore. He is practising yoga, and enjoying the company of Lakshmi. Could this refer to taming of the wild tribes of the region by the arrival of Buddhists, Jains and Brahmins from the Gangetic plains over 2000 years ago?

From Sri Lankan texts which are about 1500 years old, we learn of a prince called Vijaya who came from the eastern coast of India. His grandfather was king of Bengal (Vanga) and his grandmother was the queen of Odisha (Kalinga). Their daughter was captured by a lion-king Vijaya descended from that family tree. Is there a link between the Narasimha temples of eastern coast of India, and this story? We can only speculate. But things get more interesting when we consider the origin of Satavahan kings from Deccan regions who between 100 BCE and 200 CE controlled the ‘cotton route’ highways which took cotton from the Andhra regions to be exported from the seaport of Sopara, near Mumbai, to faraway Rome.

The cotton merchants of the Satavahan era patronised Buddhism and Jainism, and built some of the earliest Buddhist and Jain caves in the Deccan region including Ajanta in the Deccan hills, and in Amravati, and Nagarjunakonda, in Andhra regions. The kings favoured the Vedic religion and were the first to give lands to Brahmins, which would later play a major role in establishing India’s temple-building tradition. Women in Satavahana region were powerful. Royal titles included the mother’s name, Gautami-putra, for example. Women were known to make donations to Buddhist, Jain and Brahmin establishments. As per one legend, the founder was a child who rode a lion. In early Indian art, the image of a warrior riding a lion is a common theme. Was this the original Narasimha, the man who tamed the lion, founder of the Satavahana kings? We can only speculate. In art, the Andhra people were shown with headbands displaying hooded serpents indicating their reverence to the popular Naga cults favoured by farmers.

The feudal lords of the Godavari and Krishna basins were fiercely independent . We find those who sought control over them were mostly outsiders, especially from the drier uplands further West. Even the Satavahanas were perhaps from Western Deccan, as were later rulers like Vakataka, Rashtrakuta, Yadava, Chalukya. The Ikshavakus (3-4th century CE) were probably local. They may have built the first Hindu temple in Nagarjunakonda dedicated to Mahasena, or Kartikeya.

This independent spirit of the Andhras manifested in the development of the Prakrit language and later the Telugu language, despite the popularity of Sanskrit amongst kings. By 1000 CE, we find the Kakatiya kings emerging, uniting the Telugu speaking people, patronizing translation of the Mahabharata into the local language. The Kakatiyas kings built the famous Ramappa temple dedicated to Shiva. They also revered the Vishnu temple atop the hills of Tirumalai. Tamil people, further south, long ago recognized this temple as being located in the area where the Tamil language changes to Telugu. Pallava queens offered land for the maintenance of this temple.

The Kakatiya inscriptions proudly claim they are Shudra. But later, we find Kakatiyas making land grants to Brahmins who identify their patrons as Kshatriyas, tracing their lineage to the solar and lunar dynasties. This process of becoming Kshatriya was widespread in the South where Brahmins elevated the social status of local chieftains through rituals and temples. This is what made Puranic Hinduism quite popular. Buddhism and Jainism, patronised by merchants mostly, which privileged hermits over kings, could not keep up and so gradually waned in political significance. It is in these regions we hear stories of how over time worship of Shiva and Vishnu replaced the worship of Jain and Buddhist sages. Shankaracharya ieclipsed Buddhism in 8th century, while Ramanuja eclipsed Jainism in the 12th century. Ramanuja, who hailed from further south, played a key role in establishing the temple rituals of Tirupati Balaji temple and connecting the doctrine of bhakti with Vedanta.

It was during the Kakatiya times that Muslim invasions began. And over time, much of Telangana came under control of the Sultanates. Pushback came from the Vijaynagar empire that stretched from the Kannada speaking lands in the west to the Telugu speaking lands in the east. By the time of the Vijayanagara kings, there was very little Buddhist and Jain influence in the Deccan region. The Vijayanagara kings were avowedly Hindus, patronising scholars like Sayana, who wrote the full detailed commentary on Vedic Samhitas.

In the Vijayanagara empire, we sense a tension between Shaiva and Vaishnava factions, the latter located more in the Karnataka side of the great empire and the latter in the Andhra side of the great empire. The early kings patronised Shiva in the form of Virupaksha whose temple is located in Hampi. Then we find the Vijaynagar kings modelling themselves around Ram, the avatar of Vishnu, and equating their kingdom with the Kishkinda region, home of Hanuman. Later, we find Vijayanagar kings patronising Venkateshwara Balaji of Tirupati in the Andhra region. This became the centre of bhakti movement, the lyrics of Annamacharya celebrating Vishnu as Venkateshwara in 15th century, and the music of Tyagaraja praising Ram in the 19th century.

But behind Shiva and Vishnu, and the Jain sages before them, and the Buddhist stupas before them, there were goddesses who silently kept watch on the Andhra countryside. These fierce goddesses were the kula-devis and grama-devis such as Gangamma, Pochamma, Polleramma, who brought prosperity and could inflict disease. Some of them became the yakshis of Buddhist and Jain lore while others were identified as the consorts of Vishnu and Shiva. On the banks of the Krishna river, atop a hill, is located Kanakadurga temple where the goddess is worshipped as the killer of the buffalo-demon Mahishasura. But she is also linked with Shakambari, the goddess of vegetation. In Vishnu temples of the region, the shrine of Lakshmi is always separate from Vishnu temples to assert her independence. Vishnu follows Lakshmi to earth, in local lore. At Tirupati, the goddess Padmavati is located at the foothills. To stay on the hill, Venkateshwara had to pay her a bridal price, which he is still repaying with the help of devotees.

These stories remind us once again of the powerful women of the Satavahana period, and to Kakatiya queens like Rudrama Devi, who controlled power and property of the Andhra lands. Even in modern times, the land of the Telugu people is embodied in the image of Telugu Thalli the mother of the land who holds in her hand a pot and a sheaf of grain.