A Brahmin in Kerala 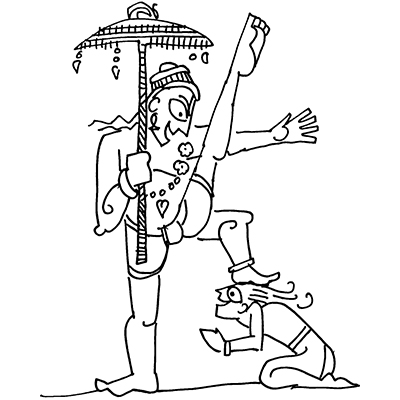 The Puranas tell the story of an asura king called Mahabali who gave people whatever they desired. Mahabali had thrown out Indra, king of devas, who ruled the skies, and now controlled the three worlds: the sky, the earth and everything in between. Mahabali was a generous king: he offered to satisfy everyone’s desires. And so, a dwarf (Vaman, in Sanskrit) or some say a young Brahmin (Vaman, is also a corruption of Brahmin) approached him and asked for three paces of land, just enough for him to recline on. Mahabali gave away the three paces of land as promised. The dwarf turned into a giant. In two paces, he claimed the three worlds, all that Mahabali had. Where do I put my foot now, asked Vaman, demanding the third pace of land. Mahabali offered his head. Vaman then shoved the asura-king to the realm under the earth, and restored the skies to Indra.

In early Vedic literature, there are several references to one Trivikrama, who conquers three worlds by taking three steps. Trivikrama is identified with a deva called Vishnu and Narayana. The overpowering of asuras by devas with the help of a dwarf is a story that first comes in the later Vedic text known as Shatapatha Brahmana. Even later, in Puranas, Mahabali is introduced as the asura-king. This story evolved from the Vedic (1000 BCE, North India) to Gupta period (300 CE, Pan India). Both Vedic and Puranic ideas reached every corner of India, along with Buddhism and Jainism, as Brahmins and monks migrated southwards, along with traders.

A thousand years ago, these northern migrants had reached the land we now call Kerala. This land was influenced by many forces: local tribal culture, Tamil ideas from the east, Buddhism and Jainism and Brahminism from the north, and from the west came Judaism, Christianity and Islam via merchants who sought spices from this land. When the 20th Century dawned, Kerala had clearly been exposed to the world – even China. But its structure was firmly hierarchical. Everyone belonged to a ‘jati’ and every ‘jati’ was located in a complex hierarchy established through marital relations, family vocation, and rules of purity. Those on top were not just rich, powerful, and educated – they were also pure. In other words, the idea of caste was hegemonic. This idea clearly came with the Brahmins, who also brought with them the idea of temple-based agricultural communities that enabled art and literature to thrive.

In the 20th Century, saw a reform movement in Kerala that challenged this old hierarchical system that legitimized inequality. New laws demanded redistribution of land, and the spread of education for all. Kerala changed forever. Two groups emerged: one that saw the past nostalgically and one that saw the past as a period of oppression. Those who spoke of the past nostalgically spoke of Brahmin called Parashuram who had killed warrior-kings of India and established a unique Brahmin-based system in Kerala where property was passed on via women, not men. Those who spoke of the past as oppression spoke of Vaman, the dwarf Brahmin, who had cunningly usurped Kerala from the generous Mahabali, and claimed it for Indra, who legitimised the Brahmin way of life, based on caste divisions and hierarchy. Thus mythology is used to legitimise history by everyone.

What is never discussed are the details that have less to do with politics and more to do with spirituality. Parashuram, the Brahmin, raised his axe against warrior-kings who did not value dharma: which means they did not protect and enable the weak but instead used their power to dominate. He created a society where Brahmins would control the land, hoping they would create a dharmik society but soon realised they themselves were too competitive to bother with collaboration. That is why a new system was created in Kerala, which is described in the 16th century lore Keralolpati (origin of Kerala). As per this, the kings of the land would not be owners of the land, and owners of the land would not be kings. Even this separation of economics and politics did not work.

Also never discussed is how the story of Vaman is not about Brahmin domination (a version popularised by Hindutva to spite Marxists) but about the futility of a king trying to satisfy every human need. For human need can expand, become greed and outstrip available resources just as a dwarf can become a giant, in the blink of an eye. The only way to control this greed is not through politics, as Parashuram tried, but by conquest of the insatiable ego i.e, spirituality. Which is why the enlightened Mahabali bows his head and lets Vaman ‘crush’ him.