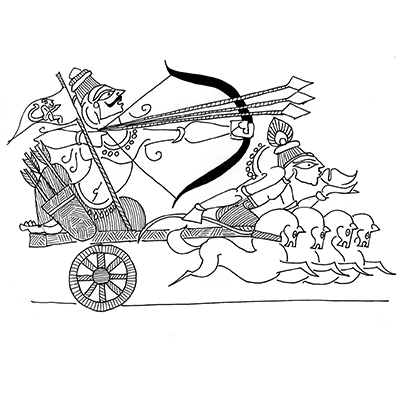 Recently many people celebrated 5151 years of the Gita. This was based on the idea that the war at Kuru-kshetra described in the Mahabharata took place in 3137 BCE. This dating is based on the Aihole inscription dated to seventh century of the famous Chalukya king, Pulakesin II, claiming that 3735 years had passed since the Mahabharata war. It is corroborated using astrological data from the epic itself and the discovery of ancient remains of a city under the sea near the modern city of Dwarka.

But historians will not be so enthusiastic. For them these ideas are simply beliefs based on a set of assumptions based on literature, with no clear epigraphic evidence to back it up.

Anyone who agrees with these doubting historians is in immediate danger of being branded ‘Westernized’ and ‘anti-Hindu’ by religious fundamentalists. “Are you saying Mahabharata did not happen? That Krishna is not real?” they will ask in outrage.

Those who ask these questions are blissfully unaware that they are victims of colonial hangover.

When the British ruled India, they observed Indians were ahistorical — they valued timeless mythic ideas to timebound historical facts. They judged Indians were therefore unscientific, with no interest in facts and evidence.

While the observation was right, the judgment was wrong. Indians were ahistorical but they were also interested in facts and evidence, not of the material world though; they were more focussed on the mental world. Hence ideas such as ‘ego’ or ahamkara, which gains popularity in Western thought only in the 20th century after Freud, can be traced to the oldest oldest Indian scripture, the Rig Veda, dated to 2000 BCE.

For ancient Hindu sages, truth or fact is only that which does not change over time (kala), space (sthan) and people (patra), hence the idea of ‘sanatan’ — the unbound, the limitless, the timeless. This took the ancient sages towards the psychological. Ideas such as love, hate, greed are timeless, unaffected by historical, geographic, personal or social realities.

In Vedic times, discoveries of psychological truths were expressed using rituals and gestures. Later the concepts were recorded as words in sutra literature such as Patanjali’s Yogasutra. Eventually these ideas were anchored in Puranic and Agamic stories, symbols and rituals and even to pilgrim sites. The point was to use saguna (material things that have form) to discover the nirguna (mental things that have no form). In this scheme of things, Krishna, Ram or Shiva contributed to understanding the architecture of the human mind and their tales explained mental responses to various worldly stimuli. In other words, they were psychological.

Tales of Krishna, Ram, Shiva and Durga, with their indifference to historical anchoring, made no sense to the British rulers of the land. Raised in Western ways they were clueless about the value placed on the mind. They only valued the material. Hence the colonial belief, “Only that which is historical is real.” Since Muhammad, Jesus and Buddha were proven to be historical figures, only they were considered real, much to the irritation of Hindus who then went about, often to absurd lengths, to prove Ram and Krishna and Shiva were historical figures.

Social scientists of the post-colonial period have now realised the great value of memory and myth, in other words, mental truths in shaping society. They have realized what Hindu sages have always known, “Even the psychological is real.”

Unfortunately most people have not heard the post-colonial scientist. We are still spellbound by the colonial judgment. We have become what the British wanted us to become: more material, more timebound, rejecting the mental, the psychological, the timeless. This increasingly material mindset reveals itself in the determined, sometimes violent, desire to locate the exact birthplace of Ram and Krishna, in the spate modern mythological fiction books that seek to historicise mythological figures and in the decision to make Gita a 5151-year-old event.